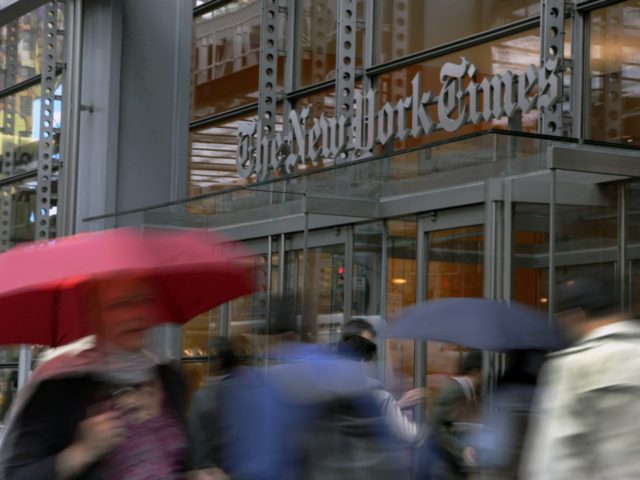 The same New York Times campaigning to take away everyone’s air conditioning has a 6250 ton cooling system in its own building, reports FrontpageMag.

Oh, and a cool million dollars of it was taxpayer subsidized.

What this means is that this lengthy Times’ piece, that seeks to shame those of us who dare to escape the oppressive heat via cooled air, was proposed, composed, and copy-edited all within the extraordinary comfort of a…

…6250 ton chilled water system while heating is provided via high-pressure steam purchased from the utility. Air distribution is achieved via variable air volume boxes for interior zones and fan powered boxes with heating coils for exterior zones. The floors occupied by the New York Times Company utilize an UFAD system, the first of its kind in a New York City high-rise. There is a cogeneration plant provides 1.4 MW of electricity for the building year-round.

And that nifty little “cogeneration plant” that keeps these Luddites, these regressive hypocrites comfortable all year ’round…?

A $1 Million grant from the New York State Energy Research and Development Authority (NYSERDA) helped offset the initial investment in a cogeneration plant.

Almost every summer the bigots at the Times publish a jihad against the miracle of air conditioning, and now we know these Marie Antoinettes are doing so in the comfort of a 6250 ton cooling system, which has nothing to do with the weight of the unit, but its power.

According to Sciencing.com, a “1-ton chiller is equal to 12,000 British thermal units. This amount of heat could theoretically melt 1 ton of ice in 24 hours.”

“British thermal units” is what’s known as a BTU, so, if my public school math education is correct, the anti-air conditioning New York Times has a 75 million — with an “M” — BTU air conditioner.

Let me repeat that… While you are probably reading this in a room with a 5000 to 7500 BTU window air conditioner or an 80,000 BTU central air conditioning unit, the New York Times is lobbying to strip you of that modest comfort while being cooled by a 75 million BTU air conditioner.

Yes, the New York Times is so gosh-darned dedicated to its own comfort, its air conditioner runs on enough power to theoretically melt 6250 tons of ice in just 24 hours.

So, once again, if my public school math is correct, that’s almost 23 million tons of ice a year.

Does anyone know what a glacier weighs, because it sounds like the New York Times is melting glaciers, which might help to explain why Manhattan is expected to be underwater sometime in the next Global Warming-predicted-time-period-that-like-all-the-previous-predictions-will-never-come-true-because-Global-Warming-is-a-hoax.

Some context… Melting 6250 tons —  or 12.5 million pounds  — of ice in 24 hour period is the equivalent of melting 36 blue whales, or 30 average-sized homes, or two Oprah Winfreys and a Jerry Nadler.

Gandhi asked us to live the change we want, so how about it New York Times?

If you want to put an end to “sexist” air conditioning, New York Times…. You first.

Don’t you want to return to the good old days when the New York “haves” escape the dreaded summer heat by heading to Maine, while we “have-nots” were stuck behind to suffer in the swelter?

Isn’t that what you really want? A return to when you elites live like Pharaohs while we Deplorables live in your neat and tidy Utopia making bricks without straw?