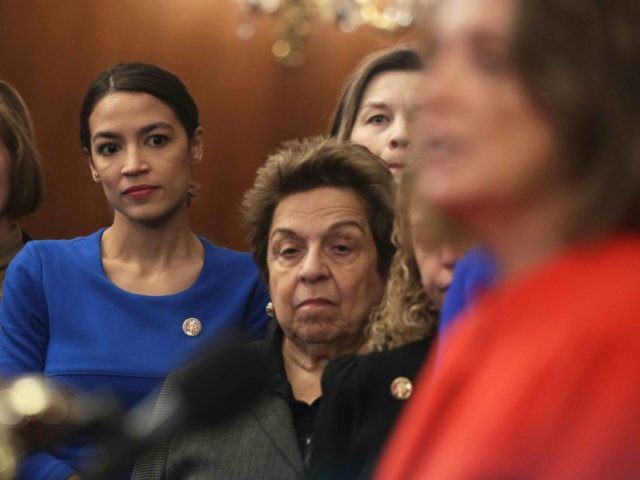 Rep. Alexandria Ocasio-Cortez (D-NY) accused Speaker of the House Nancy Pelosi (D-CA) of racism on Wednesday, telling the Washington Post that Pelosi was guilty of “the explicit singling out of newly elected women of color.”

Pelosi and Ocasio-Cortez — also known as “AOC” — have feuded ever since the “democratic socialist” newcomer upset incumbent Rep. Joe Crowley (D-NY), a member of the party’s leadership team under Pelosi, in last year’s primary race.

The latest spat began on Saturday, when columnist Maureen Dowd of the New York Times reported that Pelosi had disparaged AOC and her allies on the left (original links):

I asked Pelosi whether, after being the subject of so many you-go-girl memes for literally clapping back at Trump, it was jarring to get a bad headline like the one in HuffPost that day — “What The Hell Is Nancy Pelosi Doing?” The article described the outrage of the Squad, as Alexandria Ocasio-Cortez of New York, Ilhan Omar of Minnesota, Rashida Tlaib of Michigan and Ayanna Pressley of Massachusetts are known.

Pelosi feels that the four made themselves irrelevant to the process by voting against “our bill,” as she put it, which she felt was the strongest one she could get. “All these people have their public whatever and their Twitter world,” she said. “But they didn’t have any following. They’re four people and that’s how many votes they got.”

AOC responded on Twitter by calling out Pelosi for her past efforts to disparage the party’s “democratic socialist” wing:

Those aren’t quotes from me; they‘re from the Speaker. Having respect for ourselves doesn’t mean we lack respect for her.

It means we won’t let everyday people be dismissed. https://t.co/VMRkcd8xlL

On Wednesday, Pelosi held a meeting with her caucus in which she reportedly insisted on party unity, and discouraged House members from tweeting criticisms of each other or the leadership.

Asked by reporters whether she regretted criticizing AOC in public, Pelosi said: “Regrets is [sic] not what I do.”

Ocasio-Cortez did not tweet. But she did talk to the Washington Post, the newspaper of record in the capital city:

“When these comments first started, I kind of thought that she was keeping the progressive flank at more of an arm’s distance in order to protect more moderate members, which I understood,” Ocasio-Cortez told The Washington Post. “But the persistent singling out . . . it got to a point where it was just outright disrespectful . . . the explicit singling out of newly elected women of color.”

The Post noted that even though Pelosi had posed with AOC and other “Justice Democrats” on the cover of Rolling Stone earlier this year, the two have not spoken “one-on-one” since February.

Nancy Pelosi, Alexandria Ocasio-Cortez, Ilhan Omar and Jahana Hayes appear on our #WomenShapingtheFuture cover. We talked to them about Trump, how women are changing Congress, the state of our country and more https://t.co/b2Wty5titb pic.twitter.com/6HLM75fn7b

Pelosi was apparently upset that Ocasio-Cortez had declined to serve on a select committee on climate change, preferring to launch her own “Green New Deal.”

Joel B. Pollak is Senior Editor-at-Large at Breitbart News. He earned an A.B. in Social Studies and Environmental Science and Public Policy from Harvard. He is a winner of the 2018 Robert Novak Journalism Alumni Fellowship. He is also the co-author of How Trump Won: The Inside Story of a Revolution, which is available from Regnery. Follow him on Twitter at @joelpollak.

One thought on “Alexandria Ocasio-Cortez Calls Pelosi Racist: ‘Singling Out … Women of Color’”