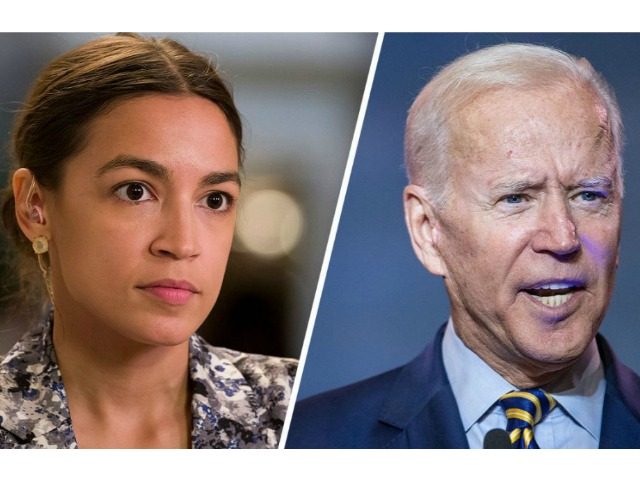 Ocasio-Cortez made the comments during an interview with the The New Yorker radio hour on Tuesday when asked by David Remnick, the show’s host, if age was a factor in whom the Democrats should nominate to take on President Donald Trump in 2020.

The 29-year-old congresswoman started off by saying that age often is used “as a proxy” for capacit, and there were certainly “some folks of a certain age where you could question their capacity.” When pressed, Ocasio-Cortez cited Trump was “a perfect example,” but admitted Biden’s performance at the debate cast doubt on his own “capacity” to be president.

“I think Joe Biden, his performance on the stage, kind of raised some questions in respect to that,” Ocasio-Cortez said. “But I don’t want to say just because someone is 79, they can’t or shouldn’t run for president. I don’t want to… use a number as a proxy for capacity.”

Remnick asked what it was about Biden that made Ocasio-Cortez think he was “not there” and how progressives “should behave” if the former vice president or any other centrist Democrat were to win the nomination.

“It’s not just about being centrist per se,” the congresswoman responded. “When you are struggling to talk about segregationists and you air on the side of discussing them in glowing terms, that is a big problem.”

Ocasio-Cortez went on to say Biden, who recently flip-flopped on the Hyde Amendment and has been accused by multiple females of unwanted touching, appeared to have “systemic” problems with women.

“I think struggling and talking about women’s rights is a big issue,” she said. “Struggling to convey respect for women in this day and age is a big issue. I think those are systemic issues, those are very deep, those are not gaffes, they are problems.”

“I agree with you when you commit yourself to the importance of finding common ground,” Harris said, “but I also believe and it’s personal and it was hurtful to hear you talk about the reputations of two United States senators who built their reputations and career on the segregation of race in this country.”

Harris also criticized Biden for opposing busing to integrate public schools for the majority of his career in public office.

“It was not only that, but you also worked with them to oppose busing,” she said. “There was a little girl in California who was part of the second class to integrate her public schools and she was bussed to school every day. That little girl was me. So I will tell you that on this subject, it cannot be an intellectual debate… we have to take it seriously.”

Biden tried to defend himself by claiming Harris had mischaracterized his record. Instead of providing evidence to dispute Harris’s indictment, the former vice president only muddled his position on busing and inaccurately claimed that he never offered praised for racists.

After the debate, Biden’s team was reportedly “freaking out” about the his poor performance. Biden’s team appeared to be correct to worry. Most political observers seemed to agree that Biden underperformed and was caught off the guard by Harris’s criticism.