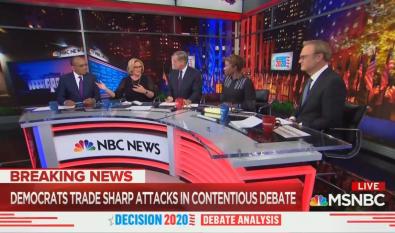 Unlike their late-night analysis after Tuesday’s debate, MSNBC had their acts together on Wednesday night, putting together in many of their initial takes a near-unanimous message: former Vice President Joe Biden was on the defensive and that it was an abomination how many of the Democratic presidential candidates condemned the Obama administration.

Hardball host Chris Matthews’s night two movie reference was Gulliver’s Travels with Biden being “tied down after rope after rope for his long political career,” having to “defend every element of it going back, as Michael Bennet said, 50 years on issues like busing.”