Up to 25 unmanned solar-powered balloons are being launched from rural South Dakota and drifting 250 miles through an area spanning portions of Minnesota, Iowa, Wisconsin and Missouri, before concluding in central Illinois.

Travelling in the stratosphere at altitudes of up to 65,000ft, the balloons are intended to “provide a persistent surveillance system to locate and deter narcotic trafficking and homeland security threats”, according to a filing made on behalf of the Sierra Nevada Corporation, an aerospace and defence company.

The balloons are carrying high tech radars designed to simultaneously track many individual vehicles day or night, through any kind of weather. The tests, which have not previously been reported, received an FCC license to operate from mid-July until September, following similar flights licensed last year.

Arthur Holland Michel, the co-director of the Center for the Study of the Drone at Bard College in New York, said, “What this new technology proposes is to watch everything at once. Sometimes it’s referred to as ‘combat TiVo’ because when an event happens somewhere in the surveilled area, you can potentially rewind the tape to see exactly what occurred, and rewind even further to see who was involved and where they came from.”

The tests have been commissioned by the US Southern Command (Southcom), which is responsible for disaster response, intelligence operations and security cooperation in the Caribbean, and Central and South America. Southcom is a joint effort by the US army, navy, air force and other forces, and one of its key roles is identifying and intercepting drug shipments headed for the United States. 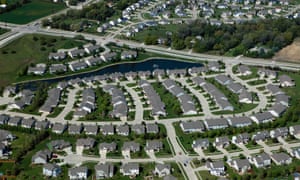 “We do not think that American cities should be subject to wide area surveillance in which every vehicle could be tracked wherever they go,” said Jay Stanley, a senior policy analyst at the American Civil Liberties Union.

“Even in tests, they’re still collecting a lot of data on Americans: who’s driving to the union house, the church, the mosque, the Alzheimer’s clinic,” he said. “We should not go down the road of allowing this to be used in the United States and it’s disturbing to hear that these tests are being carried out, by the military no less.”

For many years, Sierra Nevada has supplied Southcom with light aircraft packed with millions of dollars’ worth of sensors, which then flew over Mexico, Columbia, Panama and the Caribbean sea. But planes require expensive crews and can only fly for a few hours at a time. In a report to the Senate armed services committee this February, Southcom’s commander Admiral Craig Faller wrote: “While improving efficiency, we still only successfully interdicted about six percent of known drug movements [in 2018].”

The new balloons promise a cheap surveillance platform that could follow multiple cars and boats for extended periods. And because winds often travel in different directions at different altitudes, the balloons can usually hover over a given area simply by ascending or descending.

Neither Sierra Nevada nor US Southcom responded to requests for comment on this story. However, rival balloon operator World View, recently announced that it had carried out multi-week test missions in which its own stratospheric balloons were able to hover over a five mile diameter area for six and a half hours, and larger areas for days at a time.

“The very nature of [these balloons] is that they can operate for weeks and months,” said Ryan Hartman, the CEO of World View. “The challenge is how to harness the stratospheric winds to be able to create a persistent station-keeping capability for customers.”

Raven Aerostar, the company that is supplying the balloons for Southcom’s tests and launching them from its facility in South Dakota, told the Guardian that it has had balloons remain aloft for nearly a month. Raven also makes balloons for Alphabet subsidiary Loon, which uses them to help deliver internet and cellphone service from the stratosphere.

The FCC documents show that Southcom’s balloons are carrying small, satellite-like vehicles housing sophisticated sensors and communication gear. One of those sensors is a synthetic aperture radar intended to detect every car or boat in motion on a 25-mile swath beneath the balloon.

The balloons also have advanced mesh networking technologies that allow them to communicate with one another, share data and pass it to receivers on the ground below. 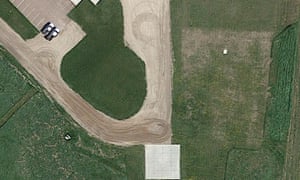 While Gorgon Stare is usually deployed on drones, Michel said that the US army has used tethered spy blimps in Afghanistan, and that US Customs and Border Protection has experimented with low-altitude balloons along the Mexico border.

But wide area surveillance from stratospheric balloons is relatively new, said Michel: “The higher the altitude of the system, the wider the area that you can cover. The trade-off is that depending on the area and the system, you may get lower resolution images.” Balloons are also subject to fewer restrictions and regulations than drones.

It is unclear from the FCC documents whether Southcom’s tests within the US are linked to any active narcotic or counter-terrorism investigations. Also, none of the parties involved would say whether the midwest vehicle data would be deleted, stored or passed on to other federal or local agencies.

“[We would like to know] what they are they doing with that data, how they are they storing it, and whether they are contemplating deploying this in the US,” said the ACLU’s Stanley. “Because if they decide that it’s usable domestically, there’s going to be enormous pressure to deploy it.”

The Southcom surveillance tests are likely just the tip of the iceberg. Scott Wickersham, the vice-president of Raven Aerostar, told the Guardian that it has also been working with Sierra Nevada and the Pentagon’s research arm Darpa on a “highly sophisticated and challenging development around the stratosphere”. This refers to the agency’s Adaptable Lighter-Than-Air (ALTA) program, an ongoing effort to perfect stratospheric balloon navigation which has included multiple launches across the country, Wickersham said.

Ryan Hartman said that World View had also completed a dozen surveillance test missions for a customer it would not name, capturing data he would not specify.

“Obviously, there are laws to protect people’s privacy and we are respectful of all those laws,” Hartman said. “We also understand the importance of operating in an ethical way as it relates to further protecting people’s privacy.”

Meanwhile, World View is currently preparing for its next surveillance flight, and Sierra Nevada’s tests in the midwest continue.

One thought on “Pentagon testing mass surveillance balloons across the US”