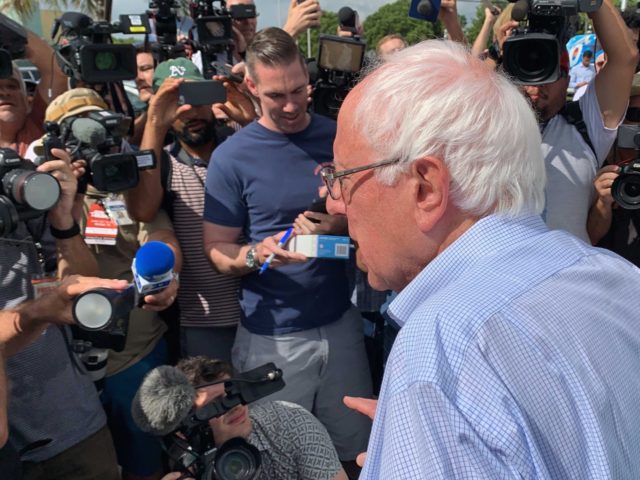 Staffers for the presidential campaign of Sen. Bernie Sanders (I-VT) reportedly roughed up members of the press during his visit to the Iowa State Fair on Sunday.

A campaign staffer for Bernie Sanders was screamed at by a local photojournalist who was repeatedly shoved following the Vermont senator’s remarks at the Iowa State Fair.

The confrontation erupted after members of the campaign relentlessly pushed the local journalists to make room for Sanders as he made his way to various attractions at the fair on Sunday.

The press pool erupted in chaos as Sanders left the campaign event, which was hosted by the Des Moines Register.

“Do not put your hands on me. You keep pushing me,” the female photographer yelled at the staffer.

Simonson added: “One staffer for the Des Moines Register pushed a gate into a reporter for the Washington Examiner after telling him that ‘not all press’ would be allowed to follow Sanders around.”

The Register stages the “Political Soapbox” for presidential candidates at the fair and is given privileged access to the candidates.

Sanders, though the oldest candidate in the field at age 77 (turning 78 in September), moves quickly through and there is often chaos in the press scrum surrounding him. (This reporter witnessed Sanders moving so quickly at a protest outside a migrant shelter in Homestead, Florida, that a photographer tripped and fell backwards.)

The socialist senator from Vermont has criticized President Donald Trump for his attitude towards the media, particularly his description of “fake news” as the “enemy of the people.”