Shot heard around the world, Antifa is a terrorist organization 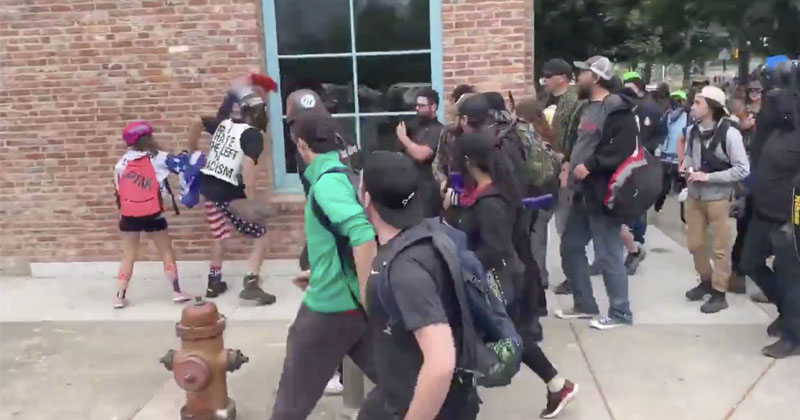 A pair of conservative rally demonstrators were attacked and chased down a highway by a large Antifa mob after they got separated from the main group of conservative marchers.

Video footage from Saturday’s “End Domestic Terrorism” rally in Portland, Oregon, shows dozens of Antifa members surrounding and attacking a pair of patriot demonstrators – one of which was clad in a Roman gladiator outfit – with unknown liquids as he fends off the violent group away from his young female companion, presumably his daughter.

The aggressive antifa shirtless man who was threatening people was arrested by police. This angered the mob who said this was police bias. #PortlandProtests pic.twitter.com/OYDsyLw3EY

The pair was assaulted with several bottles of yellow liquid while they attempted to flee the mob which chased them down onto the highway with no police in sight.

However, local media reports that police did ultimately intervene in the situation.

Though the march was largely peaceful due to the large police presence elsewhere, Antifa still was able to attack several demonstrators and destroy property.

Antifa just threw a shake at this older gentlemen walking away from the protest pic.twitter.com/0CWBxks2rO

More anarchy and chaos in Portland by antifa. pic.twitter.com/WHr8VQWzhP

Man was beaten and maced by Antifa. He wandered off dazed and bloodied and collapsed in a parking lot. No authorities have helped him yet. #PortlandProtest pic.twitter.com/Jq36rhAF22