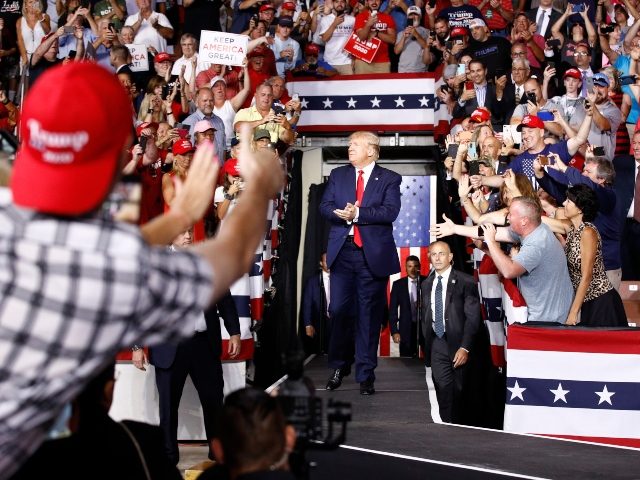 President Donald Trump criticized Democrats on Thursday for describing him and his supporters as “Nazis.”

“They view everybody as fascist and Nazis,” Trump said. “They use that term Nazi. This was a term, you could not even use it, now they use it on, like, a regular basis.”

Trump pointed out that Democrats (like Rep. Alexandria Ocasio-Cortez) accused the border agents of running “concentration camps” despite their “heroic” efforts to secure the border.

“They do an incredible job,” he said, referring border agents.

The president spoke about Democrats during his political rally in New Hampshire, where thousands of supporters cheered his political message.

He criticized Democrats for refusing to fix the immigration and asylum loopholes to keep out illegal immigrants.

“They look down upon the hard-working citizens who truly make our country run,” he said.

Trump described his supporters as the “greatest political movement in the history of this country” and said that it was built on “love.”

He repeated his dedication to the United States and its citizens first.

“We have to take care of our own,” he said. “You haven’t heard that from a politician or a political leader in a long time. It’s called America First.”

During his speech, a protester interrupted and was quickly shouted down by the president’s supporters with chants of “USA!”

“That guy has a serious weight problem,” Trump said, as the protester was ushered out of the arena. “Go home, start exercising … he’s got a bigger problem than I do. Get him out of here please.”