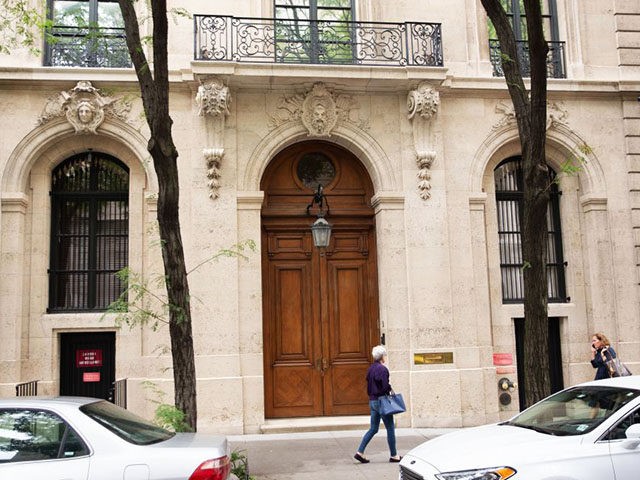 Following convicted pedophile Jeffrey Epstein’s suicide death in a Manhattan jail cell one week ago, details are emerging on what he left behind, including bizarre decor in his New York City apartment such as the portrait of former President Bill Clinton dressed in drag.

Vanity Fair is one of many media outlets who reported on the Clinton painting, dubbed “Parsing Bill,” but it also reported lots of other noteworthy items in Epstein’s multimillion-dollar pad.

The magazine noted that people can get a print of the Clinton piece for $40, not including taxes and shipping:

The other stuff in Epstein’s house is a little more tricky to acquire and might be even more cursed. The townhouse, which federal investigators recently raided for evidence of a prostitution ring of underage girls, is on East 71st between Madison and Fifth, a block from Central Park. It’s famously one of the largest homes in Manhattan—itself a renovated private school originally bought by Epstein’s mentor and Victoria’s Secret owner, Leslie Wexner. Epstein downright filled it with creepy stuff. Like the rows and rows of eyeballs framed in the entrance hall, which Vicky Ward observed in her 2003 piece for Vanity Fair.

They were “imported from England.” Also in the entranceway, he had a chessboard with figurines modeled in the image of his staff, per the New York Times. They were “dressed suggestively.” There was a stuffed dog in his study perched on a piano, according to Ward again. Of it, he would tell visitors, “No decorator would ever tell you to do that. But I want people to think what it means to stuff a dog.” It was a black poodle.

R. Couri Hay, an old spin doctor who has worked for or with many New York characters, and whom the Times said learned from “the great spinmeisters of the world” in a 2014 profile, told them recently, gosh, so much: He said that on the second floor there was a mural that Epstein commissioned, which depicted a prison scene with Epstein in the middle of barbed wire and guards. Hay told the Times that Epstein had invited him to the mansion off Fifth to see the mural and noted, “He said, ‘That’s me, and I had this painted because there is always the possibility that could be me again.’”

The Vanity Fair article noted that Epstein had no computers in his study, according to the 2003 account, but had them in a “computer room.” He also had a “leather room” with leather-covered walls.

Other items included a life-size female doll hanging from a chandelier and photos of Mohammed bin Salman and Woody Allen hanging on one wall.

Epstein was arrested earlier this summer on new charges of sex trafficking stemming from activities in the early 2000s, and a judge ordered that he remain behind bars because he was a flight risk and a danger to the public. The case would have gone to trial next June.

Epstein already served a 13-month prison sentence in Florida after a highly criticized plea deal in 2008 for minor prostitution charges, and he was also required to register as a sex offender.