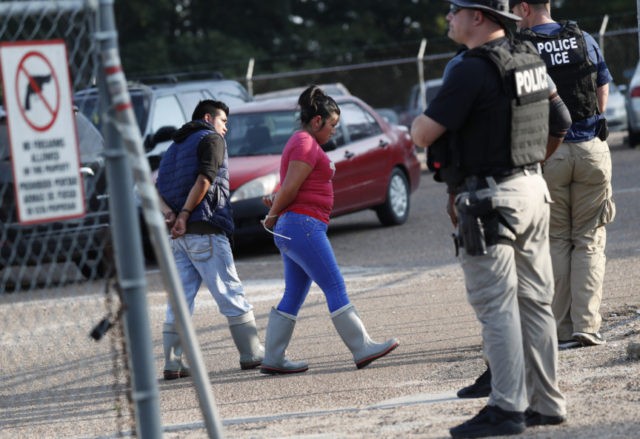 Nearly two weeks after the Immigration and Customs Enforcement (ICE) agency raided five food processing plants in Mississippi for their hiring of hundreds of illegal aliens, no employers have yet been charged, federal records reveal.

This month, ICE agents conducted the largest workplace raid in more than a decade across five food processing plants in Mississippi, netting the arrests of 680 illegal aliens. That same day, however, ICE officials said they released about 300 of the illegal workers back into the U.S. on “humanitarian grounds.” More than 200 of the illegal workers had prior criminal records. The raids have already resulted in job fairs at some of the plants seeking to hire locals.

Despite federal affidavits alleging widespread exploitation and fraud at the five food processing plants, charges against the employers who are accused of “willfully” hiring the illegal workers have yet to be brought by federal prosecutors, the Clarion Ledger reported.

To date, only 40 of the 680 illegal aliens have had charges brought against them since the ICE raid.

Federal affidavits, as Breitbart News noted, allege that the food processing plant employers were fully aware that hundreds of their employees were illegally in the U.S. and in some cases, illegal workers said they were not asked for work authorization documents.

Many of the illegal workers would arrive at the food processing plants wearing ankle monitors, indicating that they had been released by the Department of Homeland Security (DHS) into the U.S. interior after crossing the southern border.

The affidavits allege that a woman in charge of the payroll for both P H Food Inc. and A & B Inc., as well as a worker who dealt with the payroll of two plants, were fully aware of the hundreds of illegal workers that were employed. At P H Food Inc., an informant told federal officials that almost the entire staff of 240 workers was illegally in the country.

Some of the employers raided by ICE have a lengthy history of hiring illegal workers over Americans. Koch Foods Inc. which has no relation to the billionaire Koch brothers, for example, was found to have hired at least 144 illegal workers between 2002 and 2019. Last year, Koch Foods Inc. was forced to pay about $3.75 million after being found to have mistreated female Hispanic workers by subjecting them to hostile work environments, then retaliating against them if they complained.

Today, there are at least eight million illegal aliens holding American jobs in the U.S. economy that would have otherwise gone to American workers and legal immigrants. The mass employment of illegal aliens by hundreds of businesses, though, continues to go largely ignored by the law,as only 11 employers and no businesses have been federally prosecuted for hiring illegal aliens in the last year.

The number of federal prosecutions of employers who knowingly hire illegal aliens over Americans rarely exceeds 15 per year.