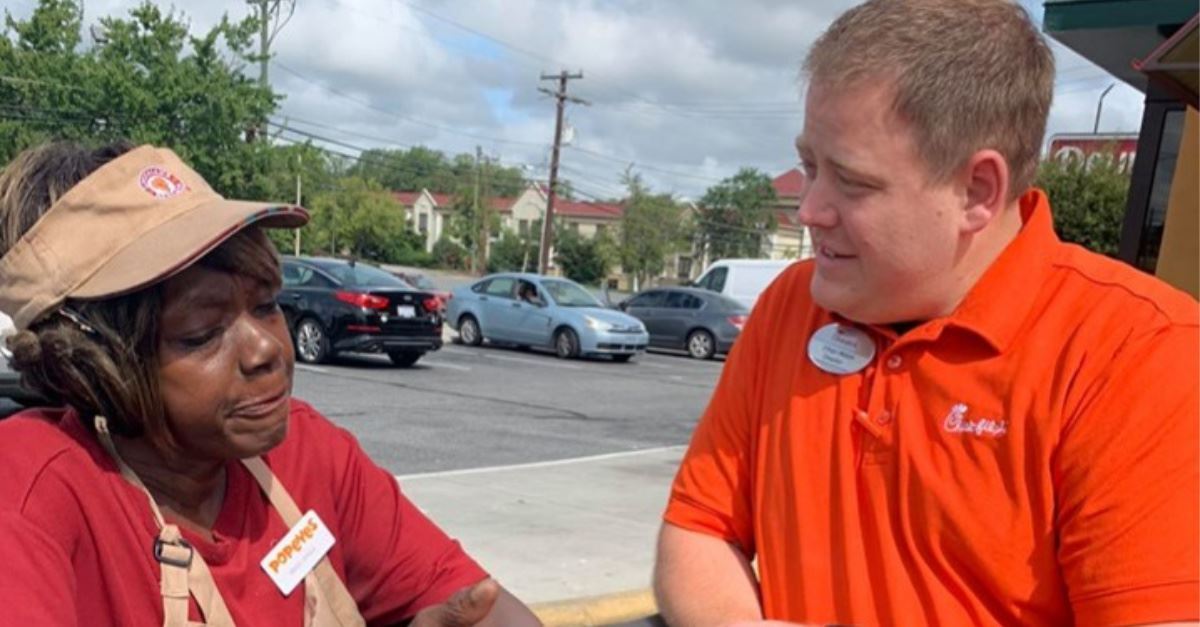 When a North Carolina Popeyes ran out of chicken sandwiches, a worker at an adjacent Chick-fil-A walked over with sandwiches from his own restaurant for Popeyes customers and stressed-out employees.

The incident in Greensboro, N.C., occurred as Popeyes restaurants nationwide were running low on the chicken sandwiches, which were introduced this month. The chain eventually sold out of the new menu item.

Jené Walker and her coworker were driving to their local Greensboro Popeyes to purchase the sandwiches when they saw a man holding Chick-fil-A bags outside the building. At first, she thought it was a Popeyes employee.

“I was joking with him, like, ‘What are you doing over here? That’s weird you’re over here with a Chick-fil-A bag at Popeyes.’ Just the timing was weird,” Walker said, according to Fox 4 News.

The man, though, was a Chick-fil-A employee who had brought Chick-fil-A sandwiches to the Popeyes workers “out of the kindness of his heart,” Walker said. The Popeyes restaurant – like many restaurants nationwide – had experienced long lines filled with people wanting the sandwiches. Demand was greater than the supply.

“I just felt that that was just super awesome, especially with everything going on in the media with them,” Walker said.

The North Carolina restaurant was sold out of the new sandwich. Walker said the Chick-fil-A employee told her, “If y’all meet me across the street, y’all can have chicken sandwiches on me.” Walker and her friend did exactly that.

“ChickFila… I promise to NEVER cheat on you!!” she wrote. “You’ve shown loyalty to me… even when I was about to be disloyal to y’all. I love y’all forever.”

Popeyes and Chick-fil-A had been engaged in a friendly Twitter debate. Popeyes says it soon will have the sandwiches back in restaurants – and this time, permanently.