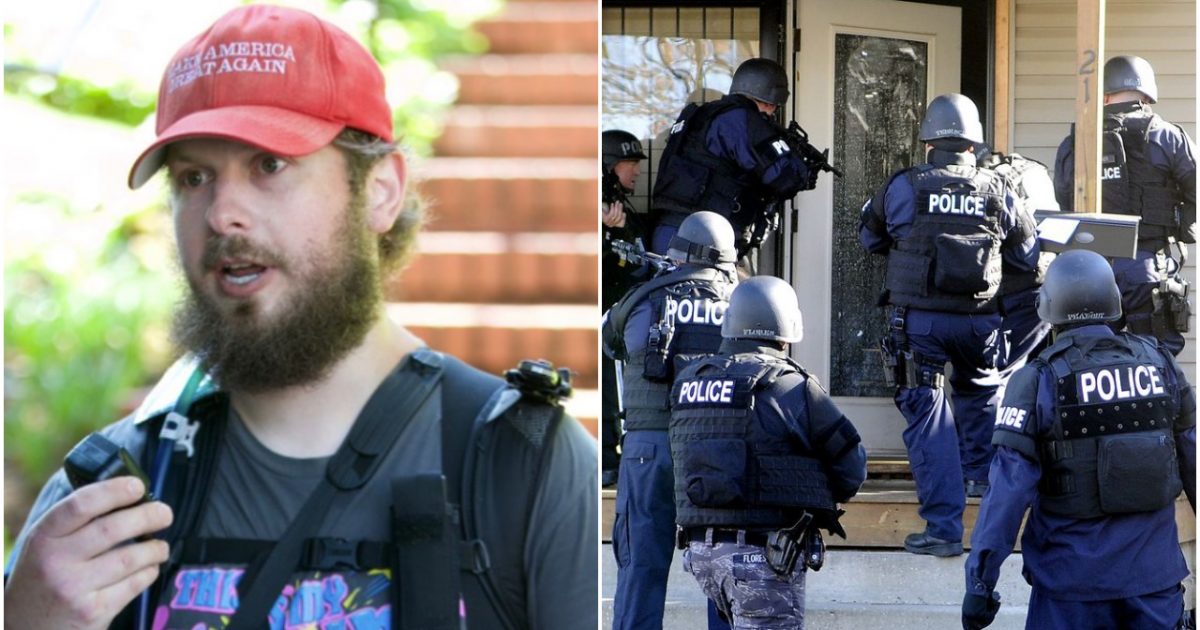 A Trump supporter in Oregon was stripped of his firearms under the state’s red flag laws for declaring that his rights wouldn’t be trampled upon by ANTIFA terrorists who have rampaged throughout Portland during the summer.

“If ANTIFA gets to the point where they start killing us, I’m going to kill them next,” said Shane Kohfield, a 32-year-old former Marine. “I’d slaughter them and I have a detailed plan on how I would wipe out ANTIFA.”

This statement triggered the FBI’s Joint Terrorism Task to revoke Kohfield’s 2nd Amendment rights and take his firearms away. In addition, they forced the former marine to spend 20 days in a veterans’ hospital as well.

Law enforcement admits that Kohfield never committed any criminal actions or charged with any crimes, but that didn’t prevent his rights from being stripped from him anyway.

The feds, who refuse to prosecute deep state cretins like James Comey but devote excessive resources to profiling and demonizing gun owners, are patting themselves on the back for targeting this veteran with pre-crime measures.

“Clearly, this latest incident shows how effective proactive policing can be in reducing the chance of violence,” retired FBI agent Michael German said. “It also makes you wonder if they’d been proactive from beginning whether all of this would have grown into the menace it has become.”

“The Portland JTTF’s role is to assess, address, and mitigate any given threat against the people of Oregon appropriately,” wrote Beth Anne Steele, a spokeswoman for the FBI’s Portland office in an email.

“Sometimes that mitigation takes the form of criminal prosecution, and sometimes it involves a holistic response, including consultation with threat assessment teams or others to divert a person before a significant violent crime occurs,” Steele added.

Kohfield, who fought two tours of duty in Iraq and suffers from post-traumatic stress disorder as a result of serving his country, felt he was responding to a domestic threat posed by ANTIFA that is being aided and abetted by Portland Mayor Ted Wheeler. He participated in a protest outside of Wheeler’s house in July.

“I was watching on the news that city of Portland did nothing to protect the people against ANTIFA,” Kohfield said. “I figured I’d show up to protect these people.”

Kohfield said he was assaulted by masked ANTIFA terrorists during a protest he attended last November, and addressed a letter to Rep. Dan Crenshaw (R-TX) warning the Congressman of a likely civil war that will break out if this violent, anti-American organization is not shut down.

The ex-marine was compliant with law enforcement, who he says he has no problems with after they took his guns while enforcing the red flag laws.

“I was told that I didn’t have a choice,” Kohfield said. “The cops were great. They were respectful and compassionate.”

He does not plan to attend any more rallies against ANTIFA or Portland Mayor Ted Wheeler, believing that the cause of de-escalating tensions is hopeless at this point.

“I have done everything I can possibly do to keep both sides from killing each other,” Kohfield said. “As long as they keep duking it out like this, it will achieve nothing.”

The only thing that will stop the violence is President Donald Trump declaring ANTIFA to be a domestic terrorist organization at the federal level, not the enforcement of unconstitutional red flag laws that render those who have defended our nation’s freedom helpless.