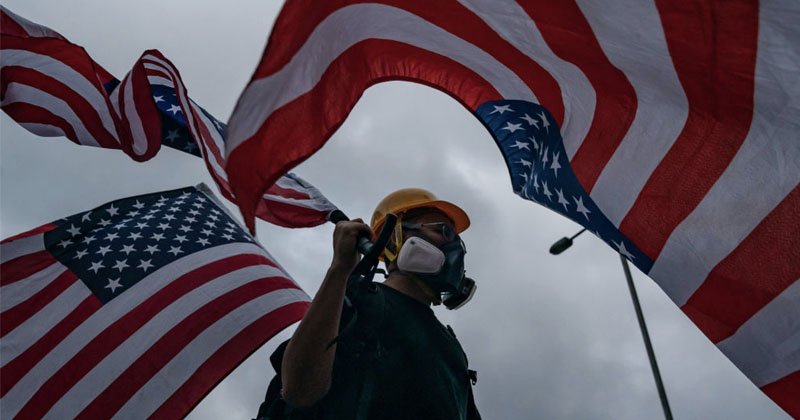 This certainly won’t help perceptions from the mainland after a summer that’s witnessed Beijing authorities repeatedly blame a US “hidden hand” for fueling the Hong Kong crisis: thousands of protesters Sunday were heard calling for President Trump to “liberate” the Chinese-controlled territory. Reuters reports the appeal for US intervention was made during a march in front of the US Consulate:

Thousands of protesters earlier sang the Star Spangled Banner and called on U.S. President Donald Trump to “liberate” the city. They waved the Stars and Stripes and placards demanding democracy.

The demonstrators directly handed petitions to US consular officials reportedly while chanting “Fight for freedom, stand with Hong Kong,” and further others which said “Resist Beijing, liberate Hong Kong.”

The call for US “intervention” comes interestingly even after HK leader Carrie Lam publicly announced Wednesday she was formally withdrawing the controversial extradition bill, which sparked the protests earlier this summer in the first place.

Sunday’s protesters called for the passing of the proposed “Hong Kong Human Rights and Democracy Act 2019” by US Congress and handed out flyers and petitions.

Reuters reported further that, “Protesters, in a petition handed to the U.S. Consulate, urged that it be passed in full.”

The proposed Act would require Washington each year to made a formal assessment of Hong Kong’s level of autonomy from Beijing and allow the US to take punitive trade measures if autonomy is compromised.

Also interesting is that China a month ago formally complained to US diplomatic officials over viral photos showing a US official from HK consulate meeting with well-known anti-Beijing protest leaders and activists.

Mainland state media had featured the meeting and it was widely held up as ‘proof’ of the ‘black hand’ of US government involvement in the increasingly violent anti-Beijing demonstrations.

A common theme of mainland coverage of the protests have been to blame US covert action for “fomenting unrest”.

🇭🇰A photo taken by a passerby shows the meeting between HK separatists and Julie Eadeh, the political unit chief of USCG, at JW Marriott Hotel at 5 pm Thursday. It's wildly used by local media, as an evidence of how close the US politicians are related to the anti-gov't movements pic.twitter.com/FBE8Jxvsy9

Bloomberg reported at the time China sent a clear and firm message to US diplomats that “China firmly opposes any contacts with them and urges U.S. to stop sending wrong signals to violent law breakers in Hong Kong.”

Sunday’s PR move to gain the greater attention of both Trump and the US Congress certainly won’t help in dissuading Beijing that there isn’t a US-HK conspiracy afoot.