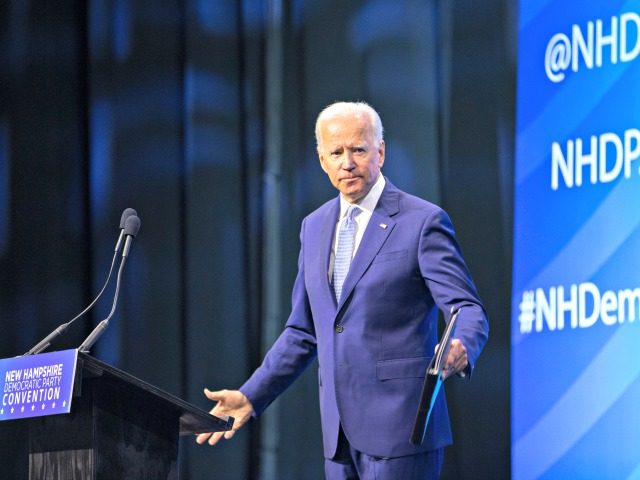 Joe Biden appeared to forget that his former running mate, Barack Obama, was America’s “last president” during a speech in New Hampshire on Friday.

The former vice president, who has worried even the staunchest of allies with his frequent lapses on the campaign trail, made the slip-up when arguing there were “natural limits” on constitutional rights like the Second Amendment.

“I’m the only guy that’s beaten the NRA, and my state is a big gun-owning state because of hunting,” Biden told voters in Laconia, New Hampshire, before touting decades-long support for gun control. In particular, Biden highlighted his work authoring the initial assault weapons ban, which was part of his controversial 1994 crime bill.

“I’m the only guy that’s beaten them twice. I got assault weapons banned for ten years, it had to be reauthorized because of hanging chads in Florida,” he said. “The last president said no, I’m not going to reauthorize it.”

The statement struck many as confusing, since the most recent former occupant of the White House, Obama, was an avid supporter of gun control, especially prohibitions on firearms utilizing high-capacity magazines.

Biden was likely referencing President George W. Bush, who in 2004 signaled he would not make renewing the 10-year-old ban a priority in an election year. Despite having publicly supported the ban in the past, Bush’s lack of enthusiasm doomed efforts at reauthorization in the then-Republican controlled Congress.

This is the second time in less than a month that Biden has appeared to forget Obama, a man he has often fondly called his “brother,” while campaigning. In August, Biden could not remember Obama’s name when invoking his administration’s legacy in dealing with Russia.

The 76-year-old former vice president has also shown an inability to recollect dates and places to the chagrin of some of his most prominent backers. Earlier this summer, Biden shocked the media establishment when he claimed to be vice president at the time of the mass shooting at Marjory Stoneman Douglas High School in Parkland, Florida.

“Those kids in Parkland came up to see me when I was vice president,” Biden said during a huddle with reporters in Iowa, before claiming that when the survivors visited Congress, lawmakers were “basically cowering, not wanting to see them. They did not want to face it on camera.”

The statement was quickly disproved as the shooting, which resulted in 17 fatalities and over a dozen injuries, actually occurred on February 14, 2018 — more than a year after Biden left office. In response, Biden’s team claimed the candidate had simply misspoken and pivoted to attacking the media for pushing it’s own “narrative” around the gaffes.

“This is a press narrative, not a voter narrative,” Biden’s spokeswoman, Symone Sanders, asserted during an appearance on MSNBC. Sanders even went to the extent of lecturing the media on what it should and should not prioritize to “elevate the conversation” surrounding the election.

“We cannot allow this election to devolve in a tit for tat over name-calling and ‘gaffes,’ something that does not matter,” she said.

That argument, however, did not appear to sway many, including some of the left’s most venerated journalists. Some, like Jamil Smith, a senior writer for Rolling Stone magazine, have even called on the former vice president’s campaign to “step forward” and explain “what is going on with him.”

There is no explanation that makes @JoeBiden look good. Still, the campaign needs to come out and say what is going on with him. Apparently, this wasn’t the only time today that he said that he was VP during the Parkland attack—in 2018. You don’t say that. https://t.co/mj3hopFLuI

In the last week alone, such suggestions have flourished as Biden’s campaign struggles to dismiss controversy surrounding his fabrication of an emotional story about the war in Afghanistan.

The controversy began when Biden told a story to more than 400 New Hampshire voters last month about how he was asked to travel to Afghanistan to honor a Navy captain during his tenure as vice president.

As Biden recollected, he was asked by a four star general to travel to Kunar province in Afghanistan — “a dangerous foray into ‘godforsaken country’” — to honor an officer that “rappelled down a 60-foot ravine under fire and retrieved the body” of a fallen comrade. When some suggested it might be too dangerous to send a sitting vice president into a war zone, Biden brushed away concerns for his own safety.

“We can lose a vice president,” he claimed to have said in response to such worries. “We can’t lose many more of these kids. Not a joke.”

Apart from Biden supposedly putting his own life in jeopardy, the story was made more complicated as the officer in question did not want the honor being bestowed by his superiors. According to Biden, the captain was refusing the medal, a Silver Star, because he felt like a “failure” because the comrade he was attempting to save died during the mission.

“He said, ‘Sir, I don’t want the damn thing!’” Biden, his jaw clenched and nearly shouting, relayed to the audience in New Hampshire. “’Do not pin it on me, Sir! Please, Sir. Do not do that! He died. He died!’”

Biden’s emotional telling of the story left those in the audience “silent” and visibly moved. Unfortunately for the former vice president, though, The Washington Post found “almost every detail of the story” to be “incorrect” upon closer investigation.

Biden visited Kunar province in 2008 as a U.S. senator, not as vice president. The service member who performed the celebrated rescue that Biden described was a 20-year-old Army specialist, not a much older Navy captain. And that soldier, Kyle J. White, never had a Silver Star, or any other medal, pinned on him by Biden. At a White House ceremony six years after Biden’s visit, White stood at attention as President Barack Obama placed a Medal of Honor, the nation’s highest award for valor, around his neck.

In fact, the paper concluded that Biden had conflated three separate stories, including one in which he actually “did pin a medal on a heartbroken soldier, Army Staff Sgt. Chad Workman, who didn’t believe he deserved the award.”

“In the space of three minutes, Biden got the time period, the location, the heroic act, the type of medal, the military branch and the rank of the recipient wrong, as well as his own role in the ceremony,” the Post reported.

Upon the story breaking, Biden’s team immediately sought to downplay and dismiss the controversy. Biden, himself, asserted the central points of his story were accurate, even if the details were not. He even went to  claim details are not an important part within the confines of the presidency.

“The details are irrelevant in terms of decision-making,” Biden explained to NPR this past week when asked if his fuzziness with specifics was problematic for anyone aspiring to be commander in chief.

All of this has left Biden’s surrogates and allies wondering if the former vice president would be benefited by fewer public appearances and less speaking time on the stump.