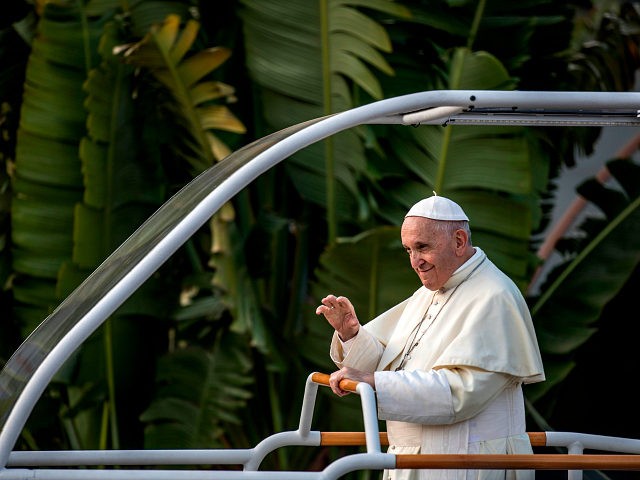 ROME — Pope Francis continued his ecological campaign in Madagascar this weekend, admiring the nation’s extensive flora and fauna while warning of devastating fallout due to a loss of biodiversity.

“Your lovely island of Madagascar is rich in plant and animal biodiversity, yet this treasure is especially threatened by excessive deforestation, from which some profit,” Pope Francis told authorities and diplomats on Saturday.

“The deterioration of that biodiversity compromises the future of the country and of the earth, our common home,” he warned.

The pope went on to enumerate his vision of the problem, while also recognizing that many poor people derive their livelihood from activities that threaten the environment.

“As you know, the last forests are menaced by forest fires, poaching, the unrestricted cutting down of valuable woodlands,” he said. “Plant and animal biodiversity is endangered by contraband and illegal exportation.”

“It is also true, however, that, for the peoples concerned, a number of activities harmful to the environment at present ensure their survival. So it is important to create jobs and activities that generate income, while protecting the environment and helping people to emerge from poverty,” he declared.

The pontiff tied together social and ecological problems, insisting that the two are intimately intertwined.

“We are faced not with two separate crises, one environmental and the other social, but rather with one complex crisis which is both social and environmental,” he said.

“In a word, there can be no true ecological approach or effective efforts to safeguard the environment without the attainment of a social justice capable of respecting the right to the common destination of earth’s goods, not only of present generations, but also of those yet to come,” he said.

Pope Francis has made the care of the environment a central theme of his six-year pontificate, returning again and again to issues of ecological responsibility, the dangers of carbon emissions, and the scourge of climate change.

In 2015, he became the first pope in history to devote an entire encyclical letter to the topic of the environment with the publication of Laudato Si (“Praised Be”), urging Christians to become more ecologically aware.

In that text, the pontiff said that the earth “is beginning to look more and more like an immense pile of filth” as “once beautiful landscapes are now covered with rubbish.”

He also denounced a failure to recycle paper and other resources, while calling climate change “a global problem with grave implications” and “one of the principal challenges facing humanity in our day.”

Citing “scientific studies,” the pontiff said that “most global warming in recent decades is due to the great concentration of greenhouse gases (carbon dioxide, methane, nitrogen oxides and others) released mainly as a result of human activity.”