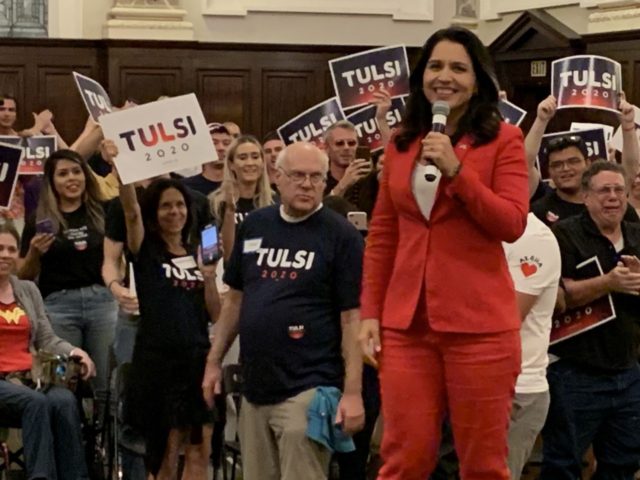 LOS ANGELES — Rep. Tulsi Gabbard (D-HI) told an audience in at the Art of Living Foundation center in Los Angeles that she would continue campaigning even though she had not qualified for the next Democratic debate.

“Debate or no debate,” Gabbard vowed, the campaign would move on — “because we know that it is ‘We, the People’ who decide who gets to lead our country.” She cast the decision to cull the debate participants as an attempt by Washington elites to control the election.

Gabbard failed to qualify for the third Democratic Party presidential primary debate in Houston this week because while she had met the Democratic National Committee (DNC) threshold of 130,000 individual donors, she did not reach 2% in enough qualifying polls by August 29. Gabbard, returned to the campaign trail on Aug. 25 after two weeks of annual training with the U.S. Army National Guard.

In the second debate, Gabbard made her mark by taking Sen. Kamala Harris (D-CA) to task for prosecuting drug offenders as California Attorney General, and for initially opposing a DNA test sought by a death row inmate who wants to prove his innocence. In the first debate, she took Rep. Tim Ryan (D-OH) to task over the issue of Afghanistan, saying that the U.S. needs to withdraw troops from the country after nearly two decades.

Her strong performances won the (non-scientific) Drudge Report debate polls, but apparently did not impress the DNC.

Cliff Larsen, a Gabbard supporter from Los Angeles, told Breitbart News that he believed it was “a good thing” tat she had failed to qualify for the September debate, “because it is empowering her base to make sure she makes it to the next one, and the rest of the country’s going to see just how strong her base is.

“This woman is nothing less than a prophet, and she’s the only one that has courage to stand up,” he added.

In her remarks Sunday evening, Gabbard emphasized her opposition to foreign military intervention by the U.S., and took other Democratic candidates to task for “fanning the flames of a new Cold War” with Russia and China.

She also took President Trump to task for withdrawing from the Intermediate Nuclear Forces (INF) Treaty with Russia, though she acknowledged that there had been problems with it (Russia had violated it for many years).

Gabbard is one of the few Democratic presidential candidates who openly opposes impeaching President Donald Trump. “I think it’s important for us to think about what is in the best interest of the country and the American people, and continuing to pursue impeachment is something that I think will only further to tear our country apart,” she told Full Court Press host Greta Van Susteren in an interview interview, according to The Hill on Saturday.

In the question-and-answer session, a Chinese-American immigrant with family in Hong Kong — who said that his relatives would benefit from the Second Amendment — asked Gabbard if she would join the other Democrats in the push for gun control. Gabbard said that the gun debate was caught between two extremes, and said that there were common sense gun control laws that Americans supported, but that Republicans in the Senate were blocking.

After one attendee thanked her for “taking down Kamala Harris,” the room erupted in a standing ovation.