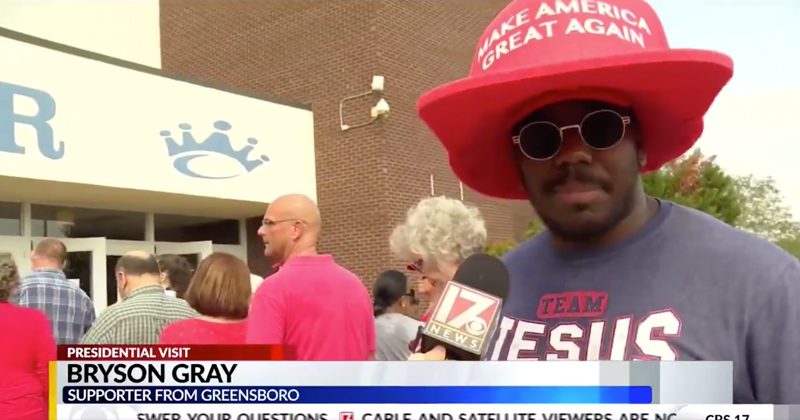 A Trump supporter in North Carolina told local media he went out and bought the biggest MAGA hat he could find after his friends told him not to wear the hat supportive of President Trump.

Standing in line on Monday outside of a Trump rally in Fayetteville, North Carolina, Bryson Gray said people criticize him for supporting the president because of his skin tone, but that the negative sentiments merely reinforce his support.

"I have a lot of friends who tell me that … I shouldn't wear the #MAGA hat, so I bought the biggest MAGA hat," Bryson Gray says ahead of tonight’s rally in Fayetteville, North Carolina. pic.twitter.com/ojOG20BdHp

“I have a lot of friends tell me I shouldn’t support Donald Trump because I’m black, which is sort of insane because this is politics – I can support whoever the hell I want to support,” the man said.

“And also they tell me I shouldn’t wear the MAGA hat, so I bought the biggest MAGA hat, so it makes it double the importance,” said the man from Greensboro, sporting a giant red foam hat emblazoned with the president’s iconic slogan “Make America Great Again.”

During the rally, Trump slammed Democrats’ shift to the far-left spectrum, saying they support the “rise of radical socialism and the destruction of the American dream,” and also blasted their support of post-birth abortions.