‘We might be lucky because he didn’t have a knife, he didn’t hit him with a rock. He didn’t kill him,’ says mother 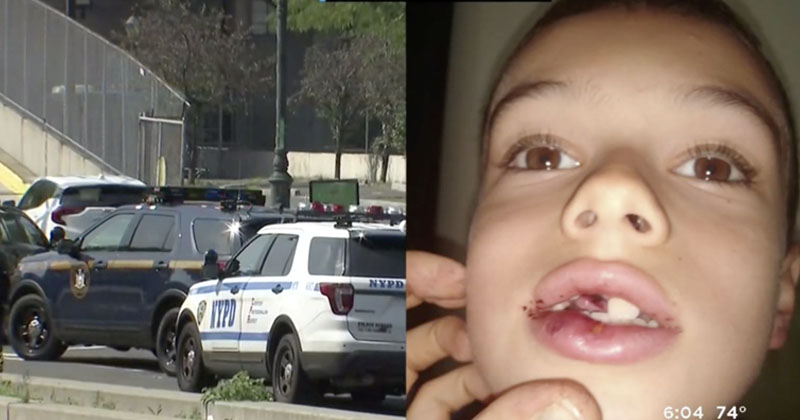 A Manhattan boy had his teeth knocked out by a crazed homeless man in an apparent random attack, according to the NYPD.

7-year-old Yaromir Potapova is recovering but traumatized after having one of his adult front teeth punched out by the homeless attacker.

“It’s like bothering me every single day,” said his mother, Valeriya Potapova. “He’s afraid to go to the park now. He’s stressed.”

She says last Wednesday morning Yaromir was riding his scooter with his little sister and grandmother on the West Side Highway near 52nd Street.

He was a few feet ahead when she says he stopped to let them catch up but was suddenly attacked.

Police identified the suspect as 67-year-old Ryan Fran shortly before arresting him. He is reportedly charged with assaulting a child under 11, assaulting a police officer and resisting arrest.

Valeriya questioned why mentally ill individuals like Ryan were able to roam freely in NYC to begin with.

“It shouldn’t be like this, people with mental issues shouldn’t walk outside,” said Valeriya. “We might be lucky because he didn’t have a knife, he didn’t hit him with a rock. He didn’t kill him.”

As we widely reported, America and Europe’s societal and cultural fabric is deteriorating as a result of globalist propaganda, proliferation of drugs from Mexico and China, rise of degenerate lifestyles, and decline of religious faith.

Until Democrat leaders in New York City cease their war against the police and law and order, anarchy in that city will likely continue.