Not buying the Democrat narrative

A new Gallup poll has found that 83% of voters in the US believe the blame for most mass shootings can be pinned on a “failure in our mental health system”.

That reasoning was the most popular choice among a list of potential factors voters feel are to blame “a great deal” or “a fair amount”.

The second highest factor was “the spread of extremist viewpoints on the internet,” with 79 percent agreeing it spurs mass shooters. 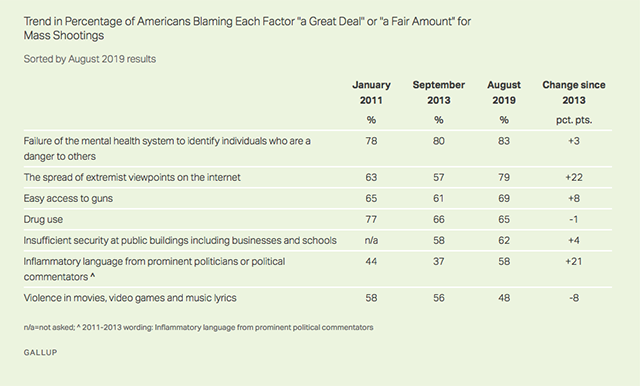 ‘Easy access to guns’ was ranked third with 69 percent, just 4 percentage points above ‘drug use’.

A further 58 percent said that ‘inflammatory language from prominent politicians or political commentators’ was a factor.

When the factors were analyzed as being to blame ‘a great deal’ only, ‘failure of the mental health system to identify individuals who are a danger to others’ ranked top with 55%. 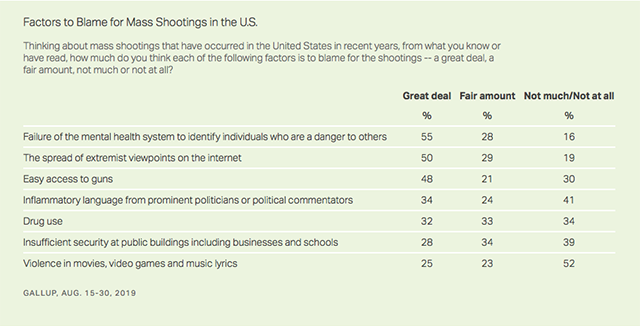 The findings come at a time when Democrats are blaming the President directly for shootings and pledging to enact strict gun control measures, including enforced government buybacks.

While these initiatives are “common sense” to advocates, if one takes the time to examine the data and evidence, it becomes abundantly clear that gun control in this form will do little to reduce gun violence.

No Democratic candidate has focused on the mental health aspect, which most Americans clearly think is the overriding issue.