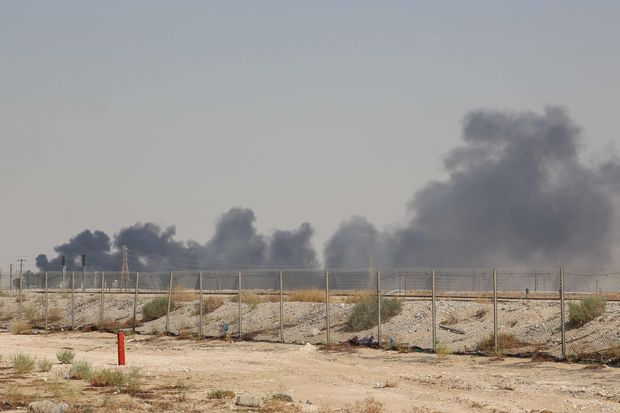 Ever since the dual 1970s oil crises, energy security officials have fretted about a deliberate strike on one of the critical choke points of energy production and transport. Sea lanes such as the Strait of Hormuz usually feature in such speculation. The facility in question at Abqaiq is perhaps more critical and vulnerable. The Wall Street Journal reported that 5.7 million barrels a day of output, or some 5% of world supply, had been taken offline as a result.

To illustrate the importance of Abqaiq in the oil market’s consciousness, an unsuccessful terrorist attack in 2006 using explosive-laden vehicles sent oil prices more than $2.00 a barrel higher. Saudi Arabia is known to spend billions of dollars annually protecting ports, pipelines and processing facilities, and it is the only major oil producer to maintain some spare output. Yet the nature of the attack, which Iranian-supported Houthi fighters from Yemen claimed was the result of a drone attack by their forces, shows that protecting such facilities may be far more difficult today. U.S. officials blamed Iran and U.S. and Saudi officials were investigating the possibility that another Iranian-backed group carried out all or part of the attack using cruise missiles launched from Iraq. Iranian officials on Sunday denied responsibility for the attacks.

There are countries that even today see their output ebb and flow as a result of militant activity, most notably Nigeria and Libya. Others, such as Venezuela, are in chronic decline due to political turmoil. Such news affects the oil price at the margin but is hardly shocking.

Deliberate attacks by actual military forces have been far rarer, with the exception of the 1980s “Tanker War” involving Iraq, Iran and the vessels of other regional producers such as Kuwait. When Saddam Hussein’s Iraqi forces invaded Kuwait in 1990, removing its production from the market and putting Saudi Arabia’s massive crude output under threat, prices more than doubled over two months.

Yet Saturday’s attack could be more significant than that. Technology from drones to cyberattacks are available to groups like the Houthis, possibly with support from Saudi Arabia’s regional rival Iran. That major energy producer, facing sanctions but still shipping some oil, has both a political and financial incentive to weaken Saudi Arabia. The fact that the actions ostensibly were taken by a nonstate actor, though, limits the response that the U.S. or Saudi Arabia can take. Attempting to further punish Iran is a double-edged sword, given that pinching its main source of revenue, also oil, would further inflame prices.

While the redundancies in Saudi oil infrastructure mean that output may be restored as soon as Monday, the attack could build in a premium to oil prices that has long been absent due to complacency. Indeed, traders may now need to factor in new risks that threaten to take not hundreds of thousands but millions of barrels off the market at a time. U.S. shale production may have upended the world energy market with nimble output, but the market’s reaction time is several months, not days or weeks, and nowhere near enough to replace several million barrels.

After the smoke clears and markets calm down, the technological sophistication and audacity of Saturday’s attack will linger over the energy market.