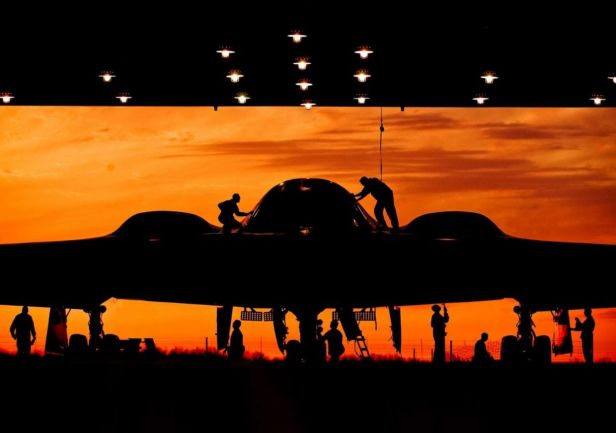 Key Point: Conventional or nuclear, the B-2 Spirit can handle almost any precision attack mission in any environment imaginable, located at practically any point on Earth

The B-2 Spirit is one of three strategic heavy bombers in U.S. Air Force service. Originally conceived to infiltrate the Soviet air-defense network and attack targets with nuclear weapons, over the decades its mission has grown to include conventional precision attack. The B-2 is the most advanced bomber in U.S. service, and the only one of three types that still carries nuclear gravity bombs.

In the late 1970s, the administration of President Jimmy Carter opposed the high-speed B-1A bomber as a waste of government money. Carter had been briefed on the new field of stealth technology and was responsible for the development of the F-117A stealth fighter. Instead of the B-1A, Carter authorized development of the Advanced Technology Bomber, or Stealth Bomber. Little was known about the bomber at the time except that it would incorporate new radar-evading technologies and possibly a dramatically different shape than previous bombers.

The U.S. Air Force sent out a Request for Proposal in 1980, and in October 1981 Northrop won a $7.3 billion initial contract to produce 127 Advanced Technology Bombers. Northrop was a curious pick—after all, it had not produced any bombers since World War II.

Northrop had been working on stealth since at least the mid-1960s. At a research facility in Rancho Palos Verdes, California Northrop had been working on radar-evading aircraft shapes and radar-resistant materials. The company lost the competition to build the Experimental Survivable Test Bed (XST), what would later become the stealth fighter to Lockheed, but did win the opportunity to build another stealth test bed, Tacit Blue. Tacit Blue featured 360 degree stealth, a must-have for a penetrating strategic bomber.