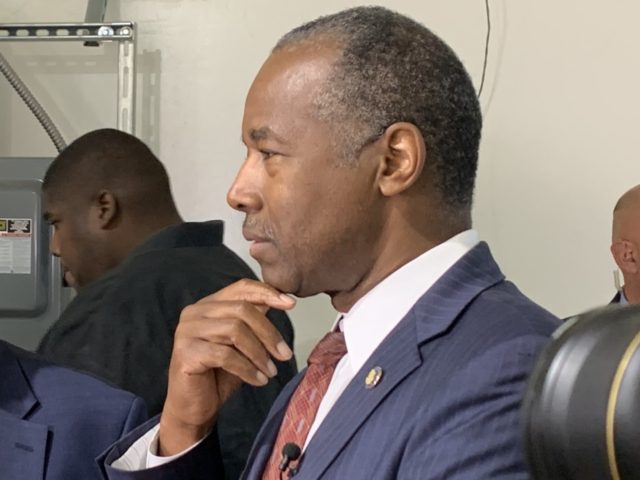 Secretary of Housing and Urban Development (HUD) Ben Carson issued an agency-wide email Friday attacking a “blatant mischaracterization” of his comments about transgenderism during his visit to California this week, which reportedly offended bureaucrats in San Francisco.

The Washington Post broke the story on Thursday, citing “three people present” at a HUD meeting:

Housing and Urban Development Secretary Ben Carson expressed concern about “big, hairy men” trying to infiltrate women’s homeless shelters during an internal meeting, according to three people present who interpreted the remarks as an attack on transgender women.

While visiting HUD’s San Francisco office this week, Carson also lamented that society no longer seemed to know the difference between men and women, two of the agency staffers said.

Carson’s remarks visibly shocked and upset many of the roughly 50 HUD staffers who attended Tuesday’s meeting, and prompted at least one woman to walk out in protest, the staffers said.

A HUD official, who had not been present at the meeting, defended Carson, saying he never used derogatory language against transgendered people. The official added that “Carson was referring to men who pretend to be women to gain access to battered women’s shelters — and not singling out transgender women as “big, hairy men.”

The Human Rights Campaign, an LGBT rights organization, slammed Carson on Thursday evening, according to Politico:

But in his email to HUD employees, Carson said his words had been twisted, according to Politico:

“During a recent meeting with local staff in San Francisco, I made reference to the fact that I had heard from many women’s groups about the difficulty they were having with women’s shelters because sometimes men would claim to be women,” Carson wrote.

“This made many of the women feel unsafe, and one of the groups described a situation to me in which ‘big hairy men’ would come in and have to be accepted into the women’s shelter even though it made the women in the facility very uncomfortable,” he added.

“My point was that we have to permit policies that take into consideration the rights of everybody, including those women.”

Carson’s concern — that women could be at risk from being housed together with those who are biologically male but who say that their gender identity is female — is not unique. In Canada, a “progressive” women’s shelter for rape victims has insisted on excluding transgendered women (who are biologically male) out of concern for the safety of the women whom it is devoted to protecting. (The response has been vandalism and harassment by angry activists.)

In May, Carson announced a new HUD rule that would allow local homeless shelters to decide for themselves if they wanted to use biological sex, not gender identity, as a basis for deciding how to provide housing. The policy under the Obama administration had been a one-size-fits-all rule forcing all shelters to recognize gender identity.

Carson has decided that the safety of homeless women must come before transgender concerns about identity — and before the political sentiments of agency bureaucrats based in a state that has failed to tackle growing homelessness.