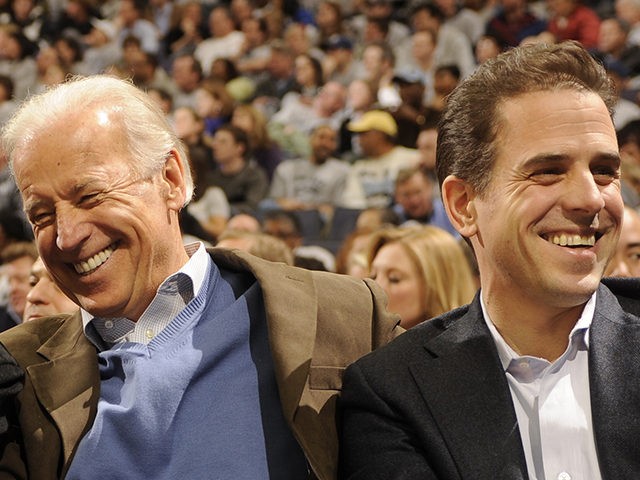 A new poll showed that 57 percent of respondents support a Justice Department probe on former Vice President Joe Biden and his son Hunter Biden regarding their actions in Ukraine and China.

Only 37 percent of respondents were against investigating them, according to the new poll by Investor’s Business Daily/TIPP, published on Friday.

Should DOJ investigate Joe Biden and his son regarding Ukraine and China?
Yes 57%
No 37%

The poll showed that the recent headlines on Ukraine, surrounding President Donald Trump’s calls for the Bidens to be investigated and the Democrats’ push to impeach him over those calls, are having a negative impact on the former vice president.

The former vice president’s son, Hunter Biden, sat on the board of a Ukrainian gas company and was paid $50,000 a month for no discernible work while his father was tasked with overseeing Ukraine for the White House.

The elder Biden had pushed the Ukrainian government to fire a former chief prosecutor, who had opened an investigation into the company’s CEO.

The Bidens have denied doing anything improper, and the former vice president has denied ever speaking to his son about his work, although conflicting accounts, including from his own son, have emerged, as well as a picture of him, his son, and a Ukrainian gas executive on a golfing trip together.

The younger Biden also had ties with an investment firm that raised funds in China. He once accompanied his father on a work trip to China and appeared to further those ties during that trip.

The poll surveyed 900 adults contacted via mobile phones and landlines from September 26 to October 3 and had a 3.3-point margin of error. The poll’s Ukraine-related questions reflect the views of a subset of 748 people.

Meanwhile, the poll showed that Trump was not being significantly affected by Democrat calls to impeach him after a whistleblower complaint expressed concerns he was withholding military aid in exchange for help with the 2020 elections.

In addition, Trump has made gains against Biden in a head-to-head matchup.

Trump also gained with self-described investors. They favor Biden over Trump by two percentage points at 49 to 47 percent, but that is down from an 11 percentage point lead at 54 to 43 percent in September.

Still, the poll also showed that 50 percent of those surveyed thought Trump asking the Ukrainian president to help investigate Biden is an impeachable offense, while 46 percent do not. Independents were split, with 46 percent saying it was an impeachment offense versus 47 who said it was not.

More — 55 percent — support the House’s impeachment inquiry into Trump, with independents supporting it at 53 percent to 45 percent.

But the poll also showed that Trump’s job approval rating has actually risen in October, despite calls for his impeachment. The IBD/TIPP poll found that his approval rating climbed from 39 percent to 43 percent during the month.

Forty-eight percent approved of Trump’s handling of the economy, versus 39 percent that did not.