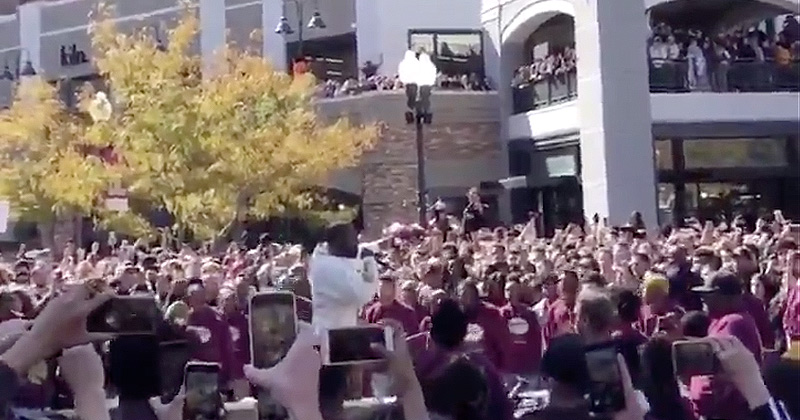 Rap star Kanye West criticized social media as a tool of manipulation and defended his support for President Donald Trump during a worship service Saturday.

Close to 10,000 people attended the event, with many waiting since 4 a.m. to see Kanye, who took to the stage shortly after 1:30 p.m. In photos from Deseret News, students can be seen perched on ledges and roofs of nearby buildings eager to catch a glimpse of the rapper.

WATCH: A mad rush to the stage for Kanye West’s #SundayService in Salt Lake City. They just opened the gates >>> pic.twitter.com/0zHWJLQPNr

While Mormons elsewhere in the community held the 189th Semiannual General Conference of the Church of Jesus Christ of Latter-day Saints, West preached at The Gateway in Salt Lake City about the ways society tries to control your behavior.

“Do not read comments on the Internet,” West told a captivated audience.

“These people don’t know you like that,” he told them. “Social media is designed to make you think slower… They want to slow you down and control you.”

West then turned to politics, praising Abraham Lincoln as a member of the Republican party which freed the slaves, before going on to reject the unspoken doctrine prohibiting him from supporting Trump.

When Kanye sounds like TPUSA you gonna have a hard time killing the slave talk. @JeffOnTheRight @TheFifteen20 @HotepJesus pic.twitter.com/TWPxX4QrWz

“They try to tell me because of my color who I’m supposed to pick as the president,” West said. “‘You’re black, so you can’t like Trump.’ I ain’t never made a decision only based off my color. That’s a form of slavery, mental slavery.”

Kanye West At Sunday Service Salt Lake City talked about the Republican Party of Lincoln freeing the slaves and how he supports Trump: “I ain’t never made a decision only based on my color. That’s a form of slavery, mental slavery.” pic.twitter.com/0Cwom01ipF

West also labeled out the media “mind controllers,” before going on to sing his 2004 hit “Jesus Walks.”

The concert is the latest in an ongoing series of spirituals West has been conducting across the country, in which he incorporates music with Sunday services possibly in anticipation of his soon-to-be-released album “Jesus is King.”

Recently he was attacked by an LGBT advocacy group over his song “Closed on Sundays,” which contains references to the Christian-based Chick-fil-A restaurant.