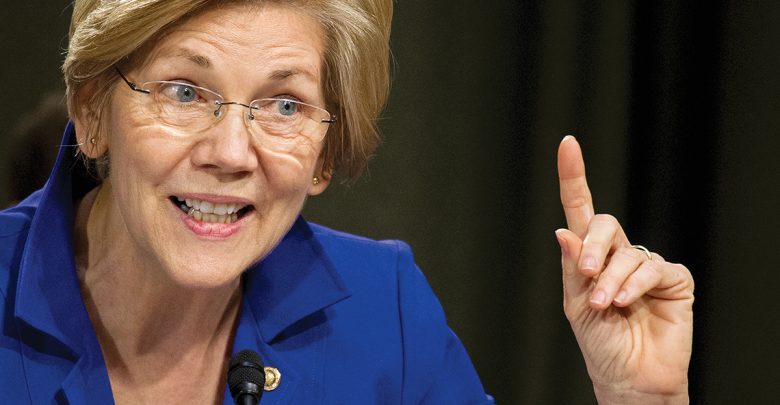 In response to the obvious reality that Elizabeth Warren is an unrepentant liar, Saturday Night Live decided to portray her as a salt-of-the-earth honest everywoman who cares only about the common man.

This wasn’t a parody.  It is how they actually see her.

If SNL actually cared about comedy instead of serving a political agenda, we would see Warren running barefoot across the plains chasing the mythic giant Oklahoma crab with her mayonnaise-tipped arrow, drawn and ready.  Or perhaps she could be Frosty the Cultural Appropriator.  Perhaps SNL could replay the scene in Ghostbusters where Dan Aykroyd is offered the opportunity to choose America’s destroyer, but instead of the Stay Puft Marshallow Man, out comes a giant belching Cherokee princess, spear in one hand and beer in the other.  That last one hits a little too close to home.

Warren has surpassed Joe Biden in more than the polls.  She has also eclipsed his role as the race’s most shameless prevaricator, which is practically a job requirement in today’s Democratic Party.

The latest lie she told is the Biden type, a reimagining of history to bolster her résumé and personal story.  One of her cornerstone stories while campaigning is that she was fired from a teaching job because she was pregnant.  In Warren’s telling, her horrible principal wished her luck and threw her out on the street.

That news must come as a real shock to the maligned principal and board of education, since they appear to have treated Warren with nothing but respect and offered her a job extension.  They accepted Warren’s resignation with regret, and why not?  It’s not every day you lose your sole American Indian on staff, which no doubt immediately messed up their “diversity is our strength” ratio.

It fell to the Free Beacon’s Colin Anderson to undercover this story.  Nate Silver’s take was classic liberal foolishness.  Silver, whose words are treated with the same reverence by liberals that Christians reserve for the Bible, declared it a non-story since mainstream media are not picking it up.  That’s quite the test.  Not even CNN or MSNBC cares, so neither should you.  It’s quite the mystery, Nate, why Warren-worshipers would not pick up this story.

This gets to the Orwellian liberal definition of a lie.  President Donald Trump is routinely called a liar by the media-Democrat establishment, but if you scan the long list of lies attributed to him on PolitiFact, it quickly becomes apparent that a Republican lie is nothing more than a statement that is damaging to Democrats.  The more damaging the statement, the louder it is decried a lie.

Liberals have a very different standard they apply to Democrats.  Because Warren’s story could have been true of some people, it is technically true in the liberal hive mind, even if demonstrably false.  This is the standard they also routinely apply to the plague of fake hate crimes, which makes the Cherokee princess the Jussie Smollett of the Democrat primary.

Warren tells at least three kinds of lies: the Joe Biden résumé-building special; the absurdist “first woman of color” whopper; and the vicious slander, which is the worst type.  Her latest gem fits into both the résumé-builder and slander categories, although this slander is not as vicious as her last attempt.

Two short months ago, this vile maiden tweeted out that “5 years ago Michael Brown was murdered by a white police officer in Ferguson, Missouri.”  That is not only a lie, but a horrible smear of a man who serves and protects Americans.

Darren Wilson did not murder Michael Brown.  Warren’s noxious play here was obvious.  Warren is performing wretchedly among black Americans and decided that lying to them would help build that support.  Based on recent polls, it didn’t work.  If she fails to capture the nomination, her continued failure with these Americans will be the main reason why.

PolitiFact refused to even acknowledge one of the worst lies in recent history, stating, “Because the significance of [Kamala] Harris’ and [Elizabeth] Warren’s use of the word is open to some dispute, we won’t be rating their tweets on the Truth-O-Meter.”

The Michael Brown “hands-up, don’t shoot” lie was proven definitively.  Wilson was the victim who was fighting for his life, a heroic man forced into a terrible situation.  But Democrats will never admit the truth since the lie serves their purpose far better.

The only thing “open to some dispute” is why anyone would read any of the liberal fact-checkers, who exist only to advance liberal narratives.

It’s a Democrat version of Taqiyyah, the Islamic concept that sanctions lying to infidels.  Just substitute Americans for infidels.  In the case of Democrats, the narrative is always more important than the truth.

This is also why Christine Blasey Ford’s lies that were so preposterous that even her own best friend and father do not appear to believe them will be repeated as the gospel truth by Democrats and the media until they take hold on popular consciousness.  History will repeat itself, since this is what happened to Associate Justice Clarence Thomas.

At the time of his Supreme Court confirmation, nearly everybody believed Thomas over Anita Hill.  Hill was no more credible than Ford.  Her story was chock so full of holes that even Biden didn’t believe her, nor did the FBI or the twelve women who testified who knew them both.

Today, it is an article of faith among liberals that Anita Hill is the hero of the story and Thomas is a villain.  In ten years, Kavanaugh will be treated the same way to where only those who followed Kavanaugh’s ordeal will know him to be innocent of the accusations.  All’s fair in the wicked interest of protecting abortion.

No great shock that Frosty the Socialist Indian also called for the impeachment of Brett Kavanaugh while casting aspersions at Thomas by praising Anita Hill as a “good and decent and honest woman.”  Kavanaugh and Thomas are in good company on Warren’s growing list of slandered Americans.  What are a handful of innocent scalps nailed to the wall when weighed against the importance of absolute political power?

In a sane world, Warren would be a laughingstock at best and a social pariah at worst.  But in the party of liars, she is a leading presidential candidate, and conservatives are left with the nauseating task of taking her seriously, since the media have no intention of doing any such thing.