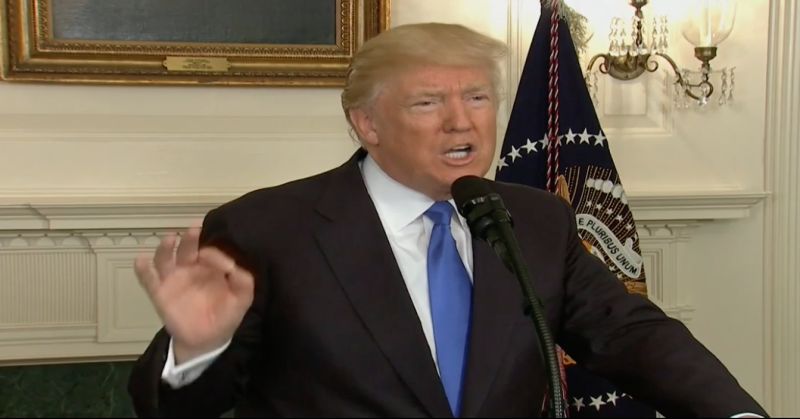 Back in 1988, one of the greatest movie villains of all time, Hans Gruber, burst onto the screen with a group of murderous thieves, seizing complete control of the Nakatomi Plaza building in Die Hard.

That movie serves as a decent metaphor for what’s currently playing out in America.  Think of the building itself as America and its hapless occupants as Americans.  Gruber and his murderous thugs embody the media-Democrat complex.  The group of foolish police and FBI leadership are best understood as NeverTrump and feckless Republicans, with John McClane aligning with President Donald Trump.

The scene that is most interesting relative to today’s unfolding events is when a Mitt Romney named Harry Ellis appoints himself to negotiate with Gruber in an attempt to force McClane to surrender.

McClane refuses to give in, knowing that it will lead only to worse horrors.  Ellis chooses poorly and is shot dead for his near comical miscalculation.

Most of the people outside the building, with the exception of one exceptional Twinkie-eating deplorable, blame McClane for the shooting.

This represents the current Democrat strategy.  Democrats are running their own version of a hostage scenario, only they’ve taken a sizable portion of the American public hostage to their eardrum-splitting insanity.  Their hope is to create a crushing wave of noise and disruption through the use of bogus impeachment screeds, relentless media attacks, Antifa violence, never-ending investigations, daily Deep State leaks, Intelligence Community hits, strategically placed partisan polls, and the rest of the tactics they are deploying.

That noise becomes overwhelming, which is the point.  The never-ending churn is intended to wear out America to where enough voters so desire a return to “normalcy” that they will submit and vote for the Democrat.  They are trying to force voters to wave the white flag.  Their hope is that drama-exhausted voters will blame President Trump for their misdeeds and pull the lever for the Democrat.  The real target of their unquenchable fury is the voters who dare oppose their plans.

It is today’s version of the “peace for our time” promise given by Neville Chamberlain.  Vote Democrat if you want peace, and the daily tantrums will end.  For those who succumb to that lie and value a media-constructed “peace” over liberty, the result will not be very different from what it was the first time, which was betrayal and attempted destruction.

Some voters will follow in Chamberlain’s footsteps.  Too many Republican pundits routinely whine about how tired and exhausted they are trying to defend President Trump or blame him for the current toxic environment.  It’s disgraceful.  They are adding a veneer of respectability to the Democrats’ big lie, which is that President Trump is some kind of special case who justifies the unprecedented assault on him.  All the other lies are nested in this one.

The level of attacks would be just as high, if not worse, on any other Republican president.  Impeachment hysteria is the new norm with a Republican in the White House.  There are plenty of data points that bear this out.  People forget the trend line on attacks against Republican national standard-bearers.  President George W. Bush was as establishment as they come, never said a bad word against his manifest Democrat attackers, and was not particularly conservative, yet the media-Democrat establishment despises him to this day.  Ellen DeGeneres committed the nearly unforgivable sin of not spitting in his face when presented with the opportunity.  Leftist hatred evolved to where they carpet-bombed Sarah Palin and her family with unconscionably evil attacks.

Trump is just the latest target of the unhinged attack machine.  Democrats hate Trump not because he’s a fighter or because of his effective use of Twitter.  They hate him because he is not an American-hating leftist.  It’s that simple, and it will only get worse from here.  If Bush’s years showed anything, it is that if a Republican president reaches out the hand of friendship to today’s Democrats, he will pull back a bloody stump.

President Barack Obama’s eight years in office brought the level of hatred and sense of leftist entitlement to a whole new level.  His two most poisonous legacies were the weaponization of the government bureaucracy and Intelligence Community into a Democrat Death Star and the active and deliberate Balkanization of America along racial and tribal lines for the sole purpose of accumulating more power.  Obama moved the intelligence agencies’ leadership beyond the “you ask for miracles…I give you the FBI” incompetence of Die Hard to the hostile partisan coup-plotters of today.

These rotten fruits have exploded into the absolute disdain that all Democrats show toward law enforcement and the unquenchable hatred they have for all Republicans, who they believe are enemies to be punished.  Patriotic working-class Americans are strange creatures to be either hated or pitied, even as Democrats value non-Americans over Americans.

As the Democrats have continued their relentless march down the long Marxist line started by Obama, they’ve also ratcheted up the class warfare language.  One would have thought, based on the tenor and tone of the last debate, that unemployment was at 35% instead of a miniscule 3.5%, even as “capitalist” has emerged as the ultimate insult in today’s Democratic Party.  Bernie Sanders proved this point when he argued that Elizabeth Warren is a fake socialist, which completed the trifecta of fake awfulness along with her previous roles as fake Indian and fake feminist cautionary tale.

Despite Obama’s wretched legacy that paved the way for today’s environment, there was nowhere near the same level of noise or discord around his administration for the simple reason that all the noise-makers were in his corner.  “No Drama” Obama was a media construction, as is the oft-repeated claim that his administration was scandal-free.  That’s true only when the media get to determine what constitutes a scandal.  Instead, the media sang soothing lullabies to the American public while the administration relentlessly and quietly worked to dismantle the constitutional republic.  That quietness created the dangerous and false sense of normalcy to which some people now long to return.

As Winston Churchill understood all too well, you cannot make peace with an enemy who despises you operating from a position of power.  President Trump has taken that message to heart.  He is John McClane.  Like the fictional character, he was thrust into an incredibly challenging environment.  And like McClane, who had no shoes, let alone any real weapons, Trump started with real handicaps, to include a completely hostile media environment, a disloyal and crazed opposition, liberal control of the courts, and near nonexistent support from the former stalwarts of his own party.  In remarkable fashion, he’s overcome all of that while remaining loyal to his voters.  That’s what makes him different.

That’s also why, against all odds, he stands a good chance of being re-elected.  His voters would like nothing more than to once again echo McClane’s signature “yippee-ki-yay” next November.