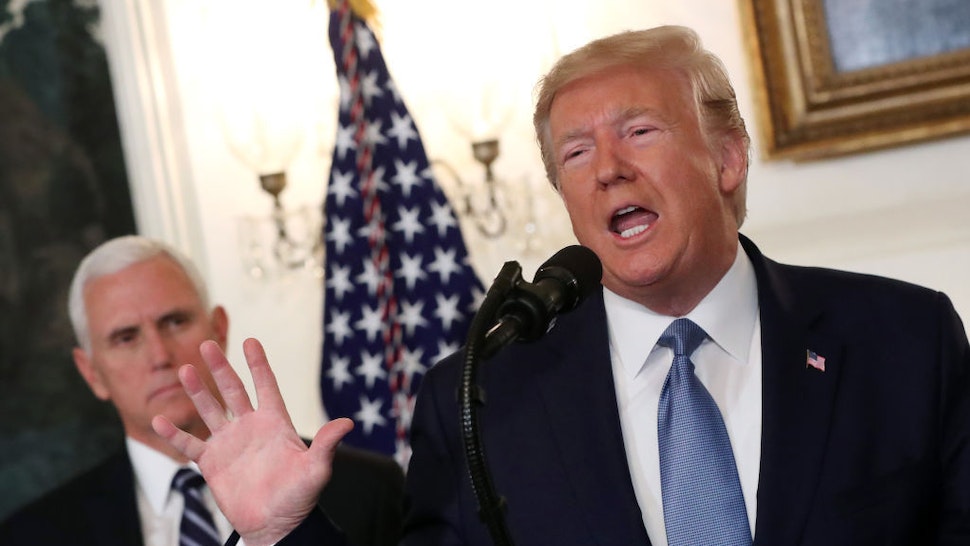 On Wednesday, President Trump, Vice President Pence, and Secretary of State Mike Pompeo gathered in the Diplomatic Reception Room to announce the permanent ceasefire between Turkey and the Kurdish-led Syrian Democratic Forces (SDF) in Syria.

“Over the last five days you have seen that a ceasefire that we established along Syria’s border has held, and it’s held very well, beyond most expectations,” said Trump. “Early this morning the government of Turkey informed my administration that they would be stopping combat and their offensive in Syria and making the ceasefire permanent, and it will indeed be permanent.”

“This was an outcome created by us, the United States, and nobody else. No other nation. Very simple,” said Trump. “Turkey, Syria, and all forms of the Kurds have been fighting for centuries. We have done them a great service, and we’ve done a great job for all of them. And now we’re getting out. We were supposed to be there for 30 days. That was almost ten years ago.”

Trump’s remarks, said Limbaugh, “feature many of the reasons he was elected president.”

“He gave a mini-barn-burner here,” said the host. “He ripped into Obama. He ripped into previous presidents for a bunch of basic dishonesty in committing American troops around the world. He pointed out that the Middle East has become more unstable as more troops have been deployed. The wars have never ended.”

“And he made a great point, that as we have continued to send troops to these areas of the Middle East and as the chaos in these areas has ratcheted up, guess what else has happened at the same time?” Rush continued. “We have opened our borders to more refugees and more immigrants. And Trump says these days are over. We’re not gonna go sponsor chaos and then say out of compassion, ‘Well, come here,’ and open our borders. We’re not falling for this anymore.”

It was “exactly” for this kind of action and these kinds of declarations that Trump was elected in 2016, said Limbaugh.

“He made it very clear what the game has been,” Limbaugh explained. “The State Department, the permanent Washington establishment commits American troops to little skirmishes here and skirmishes there, and nobody ever wins because they never end. We recycle troops. We sell more ammunition and more weapons. The areas become war-torn and unlivable and the people that live there flee, and they go to Europe and some want to come here.”

Among the sections of Trump’s speech Limbaugh highlighted was the president calling out those criticizing his handling of Syria:

TRUMP: There were some political pundits who responded to Turkey’s offensive in Syria by calling for yet another American military intervention. They are the ones that got us into the Middle East mess but never had the vision or courage to get us out. They just talk. How many Americans must die in the Middle East in the midst of these ancient sectarian and tribal conflicts?

After all of the precious blood and treasure America has poured into the deserts of the Middle East, I am committed to pursuing a different course. The same people pushing for these wars are often the ones demanding America open its doors to unlimited migration from war-torn regions, importing the terrorism and the threat of terrorism right to our own shores. But not anymore.

“That, to me, was the big point of the entire speech. This is it,” said Rush. “That encapsulates why he was elected, why he ran. The same people pushing for these wars, that create all of this chaos, that uproot so many people in their home countries, the same people making these things happen, the same people pushing for this are the same people demanding that America open its doors and borders to unlimited migration from these very war-torn regions, importing the terrorism and the threat of terrorism right to our own shores. Folks, that hits the nail on the head so strongly, I need to repeat it 10 or 12 times.”