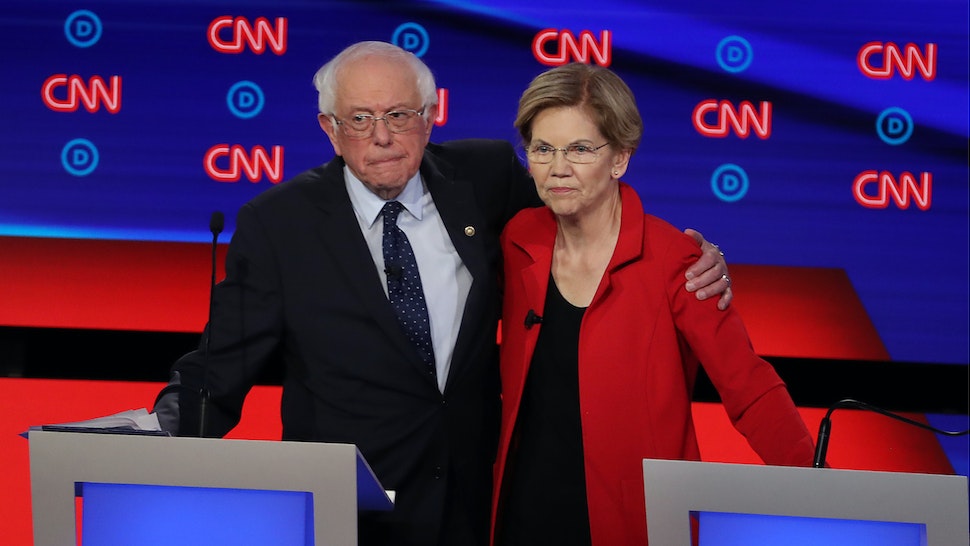 On Friday’s episode of “Real Time with Bill Maher” on HBO, Maher delivered a monologue criticizing the 2020 Democratic presidential candidates for their most extreme progressive positions.

MAHER: New rule. Someone must explain to Democrats what “binary” means. In America, we’ve got dozens of flavors of pretty much everything – Doritos and Gatorade, Oreos, Pepsi, Triscuits, Pop-Tarts – but we only have two political parties. Most democracies have a parliamentary system with many parties; we don’t. We don’t. With us, it’s always plain or peanut, cream or suppository. That is what “binary” means. Trump gets it.

Maher then played two clips from Trump rallies where the President says: “If you really like Donald Trump, that’s great, but if you don’t, you have to vote for me anyway,” and “Whether you love me or hate me, you gotta vote for me.”

The question Democrats must ask themselves is, “What would make a voter say, ‘Trump’s right. I don’t like him, but I have no choice?’” Well, let’s go down the list. Bernie Sanders says we should let the Boston Marathon bomber vote. Why? Is there a great clamoring to give deranged serial killers more of a voice in civil society? Is Hannibal Lecter thinking, “I love Trump for his narcissistic personality disorder, but Sanders really gets voters like me.” Now, I’m sure you can make an argument for this, but we’re trying to win an election here, and this just feeds into what Trump is selling.

Maher then played multiple clips in which the president call Democrats “crazy.”

During a CNN town hall in April, Sen. Bernie Sanders (I-VT) was asked: “Would [you] support enfranchising people like the Boston Marathon bomber, a convicted terrorist and murderer?”

He replied: “If somebody commits a serious crime – sexual assault, murder – they’re going to be punished. They may be in jail 10 years, 20 years, 50 years, their whole lives. That’s what happens when you commit a serious crime. But I think the right to vote is inherent to our democracy. Yes, even for terrible people, because once you start chipping away … you’re running down a slippery slope … I do believe that even if they are in jail, they’re paying their price to society, that should not take away their inherent American right to participate in our democracy.”

Hey Democrats, don’t make him [Trump] believable on that, and you win. Elizabeth Warren has not come out in favor of imprisoned serial killers voting, but she does want taxpayers to cover their sex change operations in prison, which brings up the question, “If you tried, could you come up with a policy with more third-rail buzzwords in it?”

…where are the votes in this? You know how many transgender people there are in federal prison in America? 473 – and they can’t vote. So, we’re taking this position because it makes a great campaign slogan? “Commit a crime [and] get a free d***!” “Commit a crime and your new vagina is free!” So, let’s imagine a slightly different scenario. You’re a progressive voter who likes Elizabeth Warren, you drive a Prius, hate guns, and buy kale in bulk, but you find out that Warren does not support taxpayer-funded gender reassignment surgery for convicts, so that’s it? Deal-breaker? You’re voting for Trump now? Of course not! This is the binary thing Democrats don’t get because apparently they never saw the movie “An Officer and a Gentleman,” where a drill sergeant forces Richard Gere to admit the same truth the Democratic voters need to face.

“I got nowhere else to go!” screams Gear in a clip from the film.

Sen. Elizabeth Warren’s “LGBTQ+ Rights and Equality” plan reads in part: “I will direct the Bureau of Prisons to end the Trump Administration’s dangerous policy of imprisoning transgender people in facilities based on their sex assigned at birth.”

During a recent town hall, Warren was questioned by CNN’s Chris Cuomo about her previous position that taxpayers shouldn’t have to fund transition surgery for trans inmates. The senator apologized for her prior stance and walked it back.

You hear that, Bernie and Elizabeth and Beto and the rest of them? They got nowhere else to go. So, you can stop wearing your most divisive issues on your sleeve. Target sells condoms and lube, but they don’t call it “the condom and lube store,” they hide that s*** in the back in a locked case and they call themselves Target…

Point is, instead of trying to make the people on the far-left double-dog like you, make some good people in the middle not hate you. People talk a lot in this country about identity politics. Here’s some identity for you. Only 46% of Democrats identify as liberals. Yeah. Life doesn’t end east of La Brea.

Beto O’Rourke wants to tax churches. So do I, but I’m not running for president. Beto wants to take away the tax-exempt status of any church that opposes gay marriage, a position I doubt goes down well among black churchgoers – and try winning as a Democrat without them. I’m sure Tyler Perry would vote for Beto. I’m not so sure about Madea.

During a recent LGBTQ town hall on CNN, candidate Beto O’Rourke was asked if “religious institutions like colleges, churches, [and] charities should … lose their tax-exempt status if they oppose same-sex marriage,” and he replied in the affirmative.

“There can be no reward, no benefit, no tax break for anyone or any institution, any organization in America, that denies the full human rights and the full civil rights of every single one of us,” O’Rourke stated. “So as president, we’re going to make that a priority, and we are going to stop those who are infringing upon the human rights of our fellow Americans.”

I’m not sure why Kamala Harris felt the need to start off a recent town hall by saying, “My pronouns are she, her, and hers” … for some, I guess that makes her the Rosa Parks of pronouns, but there’s a much larger group thinking, “Why is this important?” Why in the first debate did Julián Castro feel the need to take a brave stand in favor of trans-female abortion rights. Trans-females can’t even get pregnant; they don’t have a uterus – unless they’re in prison and Elizabeth Warren buys them one.

During the first Democratic primary debate in June, Julian Castro was asked if his health care plan would cover “abortion.”

Castro infamously replied: “Yes, it would. I don’t believe only in reproductive freedom, I believe in reproductive justice. And, you know, what that means is that just because a woman – or let’s also not forget someone in the trans community, a trans female – is poor, doesn’t mean they shouldn’t have the right to exercise that right to choose. And so I absolutely would cover the right to have an abortion.”

This should be easy. Just be less crazy than Donald Trump. Are you guys seriously struggling with this? 69% of voters say they dislike Trump personally, and there’s no sign anything can change their minds, but Democrats reaction to that is, “Okay, but let’s try.” Let me help you. You don’t need to be 100% Twitter approved on every issue. Twitter is not America. Most of America, all they want is to vote for someone who’s not weird. Play to them, and stop worrying that you’re gonna lose social justice warriors to Donald Trump.