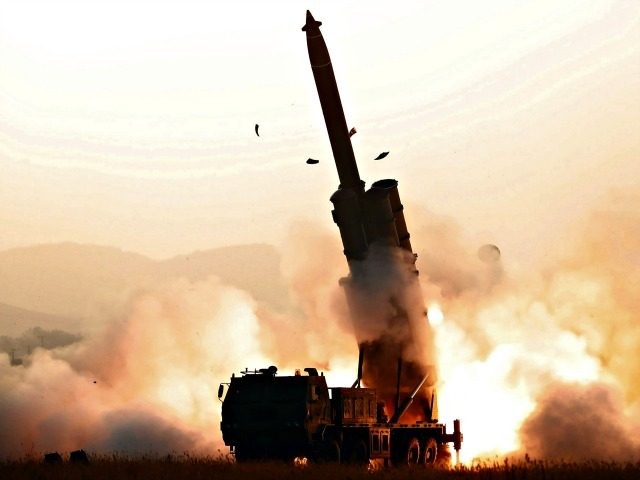 KNCA reported that North Korea’s Academy of Defence Science “succeeded in another test-fire of super-large multiple rocket launchers” as part of an effort to “verify the security of launchers’ continuous fire system.”

“The successful test-fire result was directly reported to the Central Committee of the Workers’ Party of Korea on the spot,” the agency reported.

After receiving a report of the Academy of Defence Science on the military and technical appreciation of the test-fire, Supreme Leader Kim Jong Un expressed satisfaction over it and sent congratulations to the national defense scientists who are devotedly struggling for developing the self-defensive military muscle of the country and bolstering up its armed forces.

The perfection of the continuous fire system was verified through the test-fire to totally destroy with super-power the group target of the enemy and designated target area by surprise strike of the weapon system of super-large multiple rocket launchers.

Pyongyang’s continued testing of its nuclear weapons arsenal angered officials in Washington, with the chairman of the Senate foreign relations subcommittee on East Asia, the Pacific, and international cybersecurity policy, Sen. Cory Gardner (R-CO), accusing the regime of engaging in “escalatory behavior” at a time when they are meant to be negotiating a peace agreement with the United States and South Korea.

He said in a statement:

This launch and continued North Korean aggression underscore the need for the Trump Administration to re-commit to the maximum pressure policy and for Congress to quickly pass my bipartisan legislation to impose additional sanctions against the Kim regime.

“We’re also test-firing missiles, no less than North Korea does,” he told a parliamentary session. “Our missile defense and intercept capabilities are absolutely superior to theirs.”

The test was the first activity since one day of talks between U.S. and North Korean diplomats ended without agreement, with the latter’s chief negotiator complaining that the talks had “not fulfilled our expectations and broken down.”

A report from The Heritage Foundation this week found that Pyongyang still “poses definite threats to the U.S. homeland,” as well as American military bases in South Korea, Japan, and Guam, having made no concrete attempts to reduce the size of their nuclear arsenal.