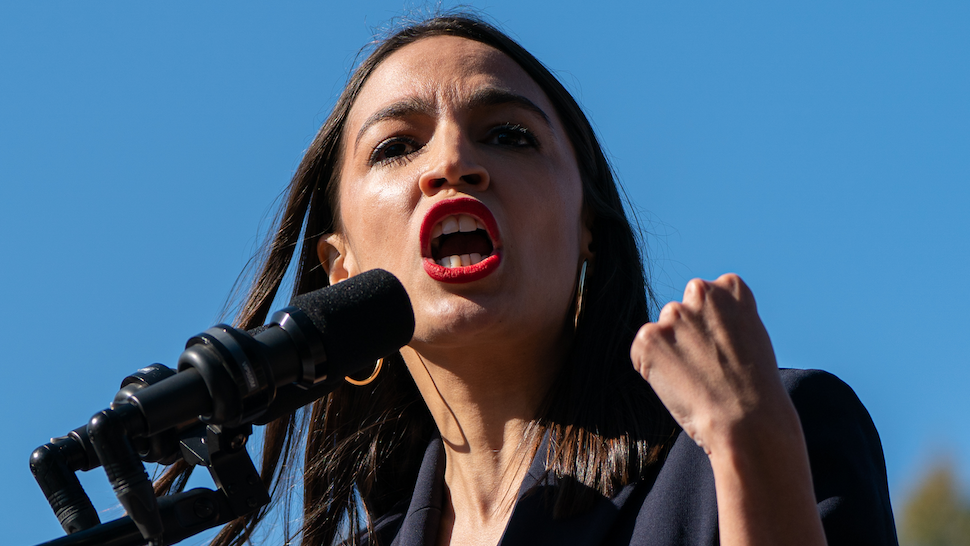 Socialist Rep. Alexandria Ocasio-Cortez (D-NY) backed criminal activity in New York City on Saturday as she supported those who stormed a subway station and refused to pay the required fare to use the service.

“Close to a thousand anti-police protesters descended on Downtown Brooklyn Friday night, blocking traffic, vandalizing a city bus and shouting obscene insults at NYPD cops,” The New York Post reported. “The demonstration formed soon after 7 p.m. on the streets near the Barclays Center, with protesters unfurling large banners that read ‘F—k the police’ and ‘Don’t let these pigs touch us.’”

In a tweet, Ocasio-Cortez falsely claimed that the United States’ criminal justice system was a “mass incarceration” system “that jails the poor to free the rich” – a claim that has no factual basis.

“Ending mass incarceration means challenging a system that jails the poor to free the rich,” Ocasio-Cortez tweeted. “Arresting people who can’t afford a $2.75 fare makes no one safer and destabilizes our community. New Yorkers know that, they’re not having it, and they’re standing up for each other.”

According to the Metropolitan Transportation Authority (MTA), entering its facilities without payment is prohibited:

No person shall use or enter upon the facilities or conveyances of the Authority, for any purpose, without the payment of the fare or tender of other valid fare media used in accordance with any conditions and restrictions imposed by the Authority. For the purposes of this section, it shall be considered an entrance into a facility or conveyance whenever a person passes through a point at which a fare is required or collected. No person shall, for purposes of gaining entry into a facility, proceed over or under any turnstile or otherwise proceed in any other unauthorized manner through an exit gate or through or past any other point at which a fare is required or collected and it shall be no defense to a charge of a violation of this subdivision that fare media, a fare media sales device or a fare collection device was malfunctioning.

The MTA also outlines the penalties for not paying, which essentially amounts to theft. The penalties include criminal prosecution:

Pursuant to section 1204(5-a) of the Public Authorities Law, any person committing one or more violations of these rules shall be subject to either:

(a) criminal prosecution in the criminal court of the City of New York, which court may impose a fine not to exceed twenty-five dollars or a term of imprisonment for not longer than ten days, or both; or
(b) civil penalties imposed by the transit adjudication bureau in an amount not to exceed one hundred dollars per violation (exclusive of interest or costs assessed thereon).

Ocasio-Cortez was in the news late this week after she came to the defense of former Rep. Katie Hill (D-CA), who resigned this week over a sex scandal that included lewd photographs or herself being leaked to the media and allegations that she had a relationship with a congressional staffer – something that is explicitly prohibited by House rules.

Ocasio-Cortez dishonestly suggested that Hill was forced to resign only over the photographs that were leaked because Hill was a woman, which is not true.

The House Ethics Committee announced an investigation into Hill over the allegations that she had a sexual relationship with a congressional staffer.