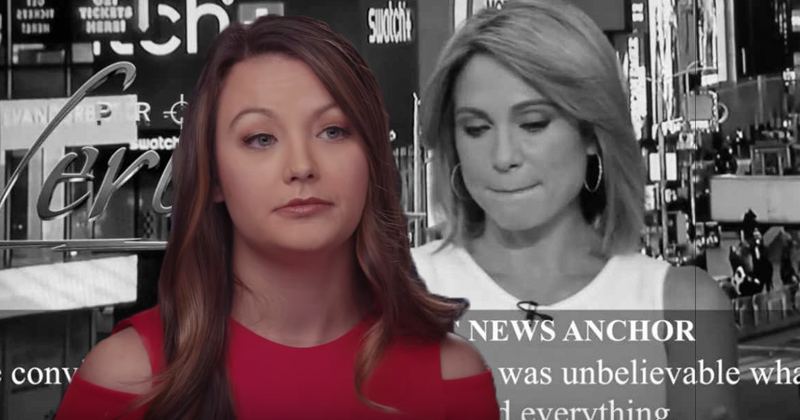 A producer who was fired from her job at CBS for leaking a tape of an ABC reporter discussing the Jeffrey Epstein case says she’s not the leaker.

Ashley Bianco worked at ABC News when 20/20 co-anchor Amy Robach was caught on a hot mic talking about how the network spiked her story on Epstein.

Bianco, 25, says she clipped the segment and that Robach’s confession was the talk of the studio on the day it happened, but afterwards she didn’t give the comments a second thought.

Media watchdog group Project Veritas got a hold of the bombshell tape and put it out earlier this week, prompting ABC to search for the leaker.

Bianco eventually took a job at CBS after she was offered a good contract, but on Wednesday the network fired her after receiving a phone call from her former employer, rival network ABC, pinning her as the leaker.

In an exclusive interview, the Emmy Award-winning producer told former Fox host Megyn Kelly they got the wrong person, and that the leaker is still working at ABC.

“I hadn’t even heard of Project Veritas until this,” Bianco told Kelly.

Likewise, Project Veritas confirmed on Friday that Bianco was not the whistleblower who contacted them, and also published a statement from the actual ABC insider apologizing for the confusion.

Speaking to Bianco, the whistleblower said they were disappointed the networks colluded to fire her, but the person said their conscience is clear.

It is terrible that you have been lashed out at by the company. I know some may put the burden of guilt on me, but my conscience is clear. The actions of the company towards you are the result of their own and not anyone else. The public outcry, from coast to coast, of all people, creeds, and political affiliations, is clear. I have not one doubt that there will always be support for you, and you will have prosperous careers. For neither you, nor I, have done anything wrong.

Robach was caught claiming ABC had sat on the story for three years after she’d interviewed Epstein accuser Virginia Roberts, but was never given the green light to put the report out which would have exposed the Clintons and members of the royal family.

“I’ve had the story for three years… we would not put it on the air,” Robach said in the leaked tape. “It was unbelievable what we had, Clinton, we had everything,” an apparent reference to the former president.

In the wake of Robach’s tape surfacing, ABC claimed they spiked her story because it didn’t meet their editorial standards.

“At the time, not all of our reporting met our standards to air, but we have never stopped investigating the story. Ever since, we’ve had a team on this investigation and substantial resources dedicated to it,” ABC said in a statement to Fox News. “That work has led to a two-hour documentary and 6-part podcast that will air in the new year.”