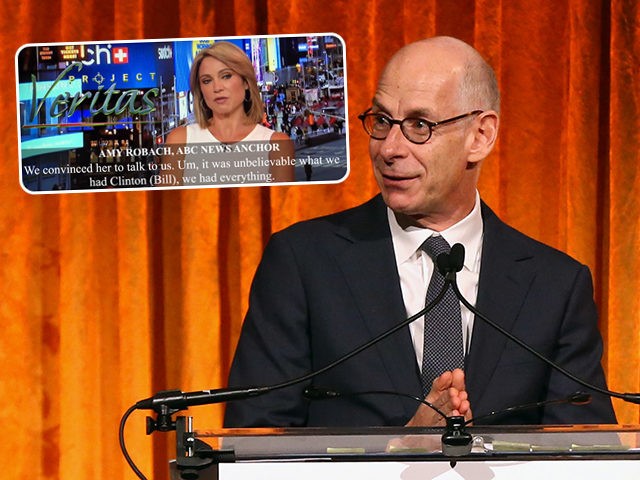 ABC News executives are scrambling to snuff out the staffer responsible for leaking footage of an anchor lamenting the squashing of her bombshell report on deceased pedophile Jeffrey Epstein, even searching through employees’ inboxes and carrying out interrogations, according to a report.

Last Tuesday, Project Veritas published an undercover video in which Good Morning America co-host Amy Robach is seen telling a producer that a witness brought forth damning information regarding Epstein, which also implicated former President Bill Clinton and Britain’s Prince Andrew, but ABC News killed the report. A clip of Robach’s off-camera tirade was saved in ABC News’ internal video clip library by Ashley Bianco, then a junior producer at the network. Bianco was fired from CBS News, who had hired her in recent weeks, following the release of the Robach clip. She denied leaking the clip to Project Veritas, and the conservative media organization claimed its source was still working for ABC.

Thus, as the New York Post‘s Page Six reports, the hunt for the Epstein “whistleblower” is in full swing. “ABC investigators have been rifling through staff emails, news logs and grilling staffers. The company has been isolating certain employees and putting them under pressure to turn on their colleagues in a bid to find the culprit, the source also claimed, adding the investigation reports back up to the very highest levels at HR at ABC’s parent company Disney,” the story says.

ABC brass is also particularly puzzled by an open letter reportedly penned by the leaker, which was published last week by Project Veritas under the alias “Ignotus,” a character from the Harry Potter book series.

Page Six continues: “An ABC insider said top execs were particularly puzzled by Ignotus. He is possibly best known as a Harry Potter character, a pure-blood wizard who has a cloak of invisibility, passed through generations, finally to Harry Potter. Ignotus also means ‘unknown’ in Latin.”

In the letter, Ignotus denies Bianco is Project Veritas’s source and criticizes ABC News for grilling employees about who leaked the damaging video.

“I went to Project Veritas for the sole reason that any other media outlet else would have probably shelved this as well. I thank all of them… for seeking truth,” Ignotus wrote.

“I sit right here with you all in complete shock. I, like many, are at a loss for words on how this has been handled. Instead of addressing this head-on like the company has in the past, it has spun into a mission of seek-and-destroy. Innocent people that have absolutely nothing to do with this are being hunted down as if we are all a sport,” the letter continued. “I challenge all of you to actually look inwards and remember why this company engages in journalism.”

ABC News has yet to respond to the open letter or issue a comment about Page Six’s report.