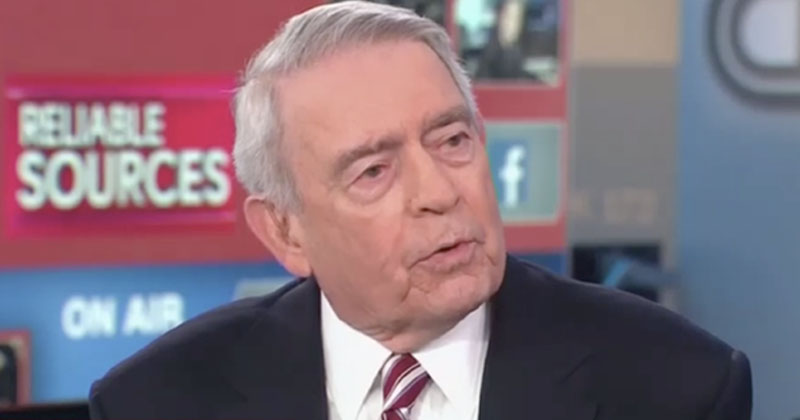 Disgraced media liar Dan Rather appeared on CNN to bash President Trump and – ironically – discuss why the truth matters.

“So let’s talk more about the truth and why it matters and what’s been happening in the impeachment inquiry coverage,” CNN’s Brian Stelter proclaimed Sunday on his show “Reliable Sources.”

“And I’ve got to start with you Dan because you are our senior correspondent today. You’ve been watching history, along with the rest of us. Do you feel that anything changed after these first two days of televised hearings?”

Rather responded that the Democrat-led impeachment hearings prove that “the truth does matter.”

“It’s becoming increasingly apparent that truth is closing in. Truth does matter,” Rather said.

“I think we’ve seen the last few days, as to say, truth has begun to close in. Facts are beginning to matter. The difference between facts and the truth, people under oath and the false narratives that have been put out in way of defense is beginning to tell,” Rather continued.

“And there’s been this feeling for a long time that well, the White House with this alternative narrative, a false narrative and with its allies in primetime on Fox was at least in a standoff with truth.”

Rather went on to call Trump supporters “cultish,” falsely claiming they care about his personality than his policies.

“And I’m not the only one making this observation that increasingly President Trump’s support seems cultish,” Rather said. “It’s all about him it’s not about the policy, it’s not about the standards of politics. Ronald Reagan had a very solid following but he stood for something in terms of policy. Franklin Roosevelt, same way.”

Notably, Rather was fired from CBS News in 2004 because he reported a false story about President George W. Bush.