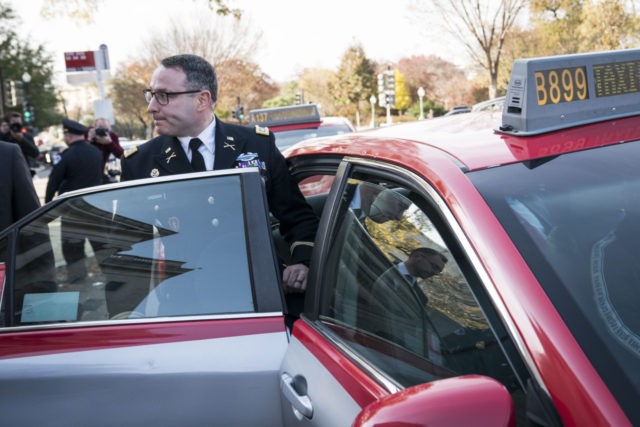 Morrison said his predecessor Dr. Fiona Hill and other staff at the NSC had raised concerns about Vindman’s judgment, as well as Deputy Senior Director for Europe John Erath.

A full range of Morrison’s concerns were not discussed, as his counsel asked him only to respond on issues with Vindman regarding Ukraine and the current case.

But Morrison did acknowledge that Vindman had a problem with working outside the chain of command.

Vindman, Morrison recalled, also expressed frustrations that he was not included on the Ukraine trip and on other conversations with ambassadors.

Despite concerns raised by his colleagues, Morrison specified that he formed his own judgments about Vindman’s character:

They, Dr. Hill, Mr. Erath and others in the NSC raised concerns about Alex, those concerns were noted, I didn’t take them for face value. I treated them as representations of others. I was on alert, but I formed my own judgments. I took no action because of the statements of someone else that I couldn’t independently validate.

Morrison’s concerns were further detailed in his closed testimony to Congress last month.

During Morrison’s transition into the NSC, he detailed what predecessor Dr. Hill told him about Vindman.

“Among the discussions I had with Dr. Hill in the transition was our team, my team, its strengths, and its weaknesses,” he said. “And Fiona and others had raised concerns about Alex’s judgment.”

Morrison also stated in his testimony that others at the National Security Council expressed concerns that Vindman had leaked sensitive information.

Officials also had concerns that Vindman worked outside of the chain of command.

“I would consider it to be an unfortunate habit he picked up from his prior boss,” he said, referring to Hill.

Morrison said that other personnel raised concerns about Vindman, leading him to “keep an eye” on him and form his own conclusion.

Morrison acknowledged that after watching Vindman’s behavior, he was not confident in his judgment.

“He did not always exercise the best judgment in terms of the policymaking process,” he said.

Morrison concluded, “First, I just want to be clear that Alex is a patriot who has literally bled for this country. But, in my experience in government, not everybody is cut out for the policy process. You often find with — and these people are on the NSC. You often find with CIA analysts who get detailed that they can’t get out of the analytical role into developing policy. State Department personnel who get promoted based on their proficiency in writing reporting cables can’t get out of that role into making policy. So not everybody is cut out for the policymaking process, and Alex, I think, was in that category.”