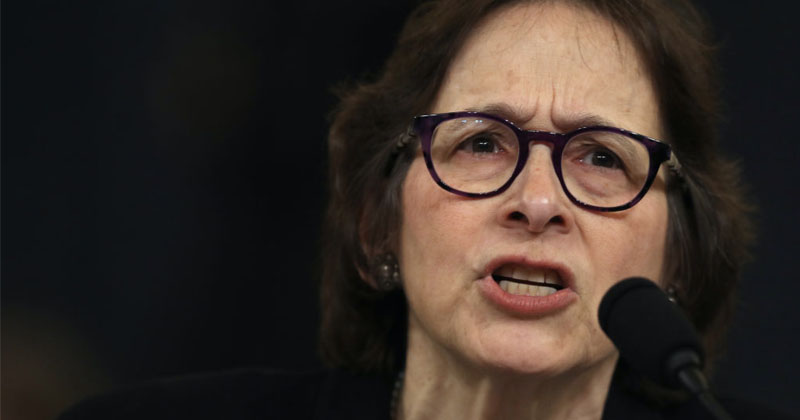 Update: Professor Pamela Karlan issued a backhanded apology for bringing up 13-year-old Barron Trump during the Democrat impeachment circus, adding she wishes President Trump would also apologize over his policies.

Pamela Karlan apologies for invoking 13 year old Barron Trump during the impeachment hearing, but then immediately shifts to Trump and says he should apologize too. pic.twitter.com/2v314tSoBz

One of the anti-Trump “witnesses” brought forward by House Democrats launched into a weird tangent about President Trump’s 13-year-old son Barron to make a point about tyrannical kings…or something.

While testifying before the House Judiciary Committee on Wednesday, Stanford law professor and lawyer Pamela Karlan began ranting about Barron and the Constitution to somehow argue that Trump wishes he could be a king.

“Kings could do no wrong because the king’s word was law,” Karlan, a generous Hillary Clinton donor, said. “And contrary to what President Trump has said, Article II does not give him the power to do anything he wants.”

KARLAN: "I will give you one example that shows you the difference between him and a king, which is, the Constitution says there can be no titles of nobility. So while Trump can name his son 'Barron,' he can't make him a baron." pic.twitter.com/FF0E0KyAEh

“I’ll just give you one example that shows you the difference between him and a king,” she continued, “which is, the Constitution says there can be no titles of nobility. So while the president can name his son ‘Barron,’ he can’t make him a Baron.”

Rep. Matt Gaetz (R-Florida) tore into Karlan for invoking Trump’s teenage son, asserting he has nothing to do with any of the relevant impeachment material.

“When you invoke the president’s son’s name here, when you try to make a little joke referencing Barron Trump, that does not lend credibility to your argument,” Gaetz told Karlan. “That makes you look mean.”