If we fill kids’ minds with garbage, we shouldn’t be surprised when there are very negative consequences 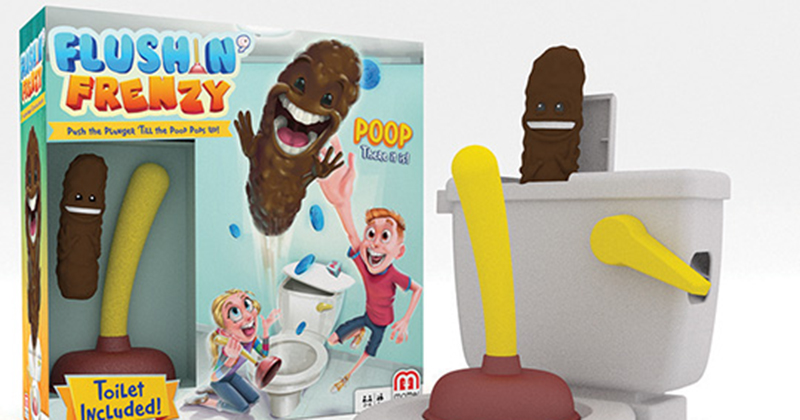 I don’t do many articles about toys, but when I learned about the disgusting toys that many Americans are buying for their children this year, I just had to comment.

Look, I certainly understand that normal bodily functions can be funny sometimes, and it is not wrong to laugh about them once in a while.  But what does it say about our society when so many of our best selling toys prominently feature pooping and farting?  We like to think that we are the pinnacle of human civilization, but the truth is that we have become an “idiocracy” where degenerates are running the asylum.  If you go back 100, 200 or 300 years ago, those that ran society deeply treasured dignity, and they would have never imagined giving their children poop and fart toys to play with.  We may think that it is a good thing that we have “loosened up” since then, but meanwhile the rest of the world is laughing at us.

As I was perusing Amazon’s top 100 toys (affiliate link) and Amazon’s holiday toy list (affiliate link), I was startled to see some of the disturbing things that parents are choosing to give their children these days.  In this article, I am going to share with you five toys that illustrate what I am talking about.  Some of you will be absolutely disgusted by the first four toys, while others will consider them to be relatively harmless.  However, we should all be able to agree on the dangers of the fifth toy.

So let’s get started.  First on our list is one of the hottest toys in America right now…

#1 The Buttheads Fart Launcher 3000: Nerf guns have been popular with kids for decades, but now you can actually have a gun that blasts “real fart smells” at your friends.  I don’t know who thought of this, but it is probably someone very twisted.  This is how the manufacturer describes the toy…

Get ready to make a stink with the buttheads fart launcher 3000, an interactive farting toy. This bad Boy is silent but Stinky, and lets you blast real fart smells up to 10 feet away! Pump the caboose full of air & it will send a fart forward towards it’s victim! Step one: place canister. Step two: pull back handle. Step three: pull the trigger and launch a fart towards your friends! This launcher is best used in well-ventilated areas, or outdoors, but will not leave a lasting stank in more enclosed areas. The scent canister includes 100+ rounds of blasts and is made with 100% plant-based material that dissipates in minutes! It’s time to reek havoc and let ‘er rip! Batteries included with purchase.

Alex Jones breaks down the Big Tech plan to enslave humanity.
By the way, save money while improving your daily life by ordering the Change Your Life Trifecta Pack during our Cyber Week sales!

#2 Flushin’ Frenzy Game by Mattel Games: When I was growing up, I played with a lot of toys made by Mattel, but never any that involved poop, a plunger and a toilet.  And if you are not really careful when playing this game, poop may actually “come flying out of the toilet”…

It’s the game of one plunger, some poop, and fast reflexes! Flush the handle on the toilet to roll the die, and when a number comes up—you have to plunge the toilet that number of times. But be careful, after any given push of the plunger the poop may COME FLYING OUT OF THE TOILET! The first player to grab the poop earns a token. If you’re quick enough to catch it in midair, you earn TWO tokens! The player who ends up with the most tokens wins! Is this game reallly gross or just gross enough You decide! Lots of silly fun for 2-4 young plungers, age 5 and up. Comes with 1 toilet, 1 plunger, 1 die, and 10 score tokens. Colors and decorations may vary.

#3 Shoot The Poop: In this game, the goal is to actually shoot poop into a talking toilet.  The player that is the most adept at doing so wins.  Apparently the manufacturer believes that this will help your children “develop fine motor skills”…

Hi folks, meet Tank! He’s the talking toilet who loves to play. It’s up to you and one other player to get your fun flingers and form a doo-doo duo! Be the first player to launch all six of your poopy projectiles into Tank’s mouth. Powered by two AAA batteries, Tank will cheer you on as you take aim, ready, and fire away! This family dexterity game helps children develop fine motor skills, and it’s finished in a flash. Sink your last floater and win the game! Don’t forget to flush! When you pull Tank’s lever, he’ll always have something to say.

#4 Poopsie Slime Surprise Unicorn-Rainbow Bright Star Or Oopsie Starlight: A toy that makes “magical unicorn poop” continues to be one of the most popular toys in the entire country.  I am more concerned about this toy than the first three that I have mentioned because of what unicorns often represent.  Unfortunately, most parents will just buy this toy because it looks cute and it sounds funny…

Make magical Unicorn poop (slime) with Poopsie slime surprise! With a little Unicorn magic and sparkle, you can customize Unicorn poop and transform it multiple times! When you gotta Go, Store the poop for magical fun anytime!

#5 “A Children’s Book of Demons”: We can certainly debate the merits of the first four toys, but there is no debate about this one.  I am not going to provide a link to this book, because I don’t want anyone to look at it or any of the pages inside of it.  This book was authored by a real occultist, and it actually encourages children to summon demons.  The following is what Activist Mommy had to say about it…

“A Children’s Book of Demons,” marketed to children ages 7-10, is a chance for young readers to “grab your coloured pencils and sigil drawing skills and dial up some demons” as a “fun” way to solve problems such as bullying or housework.

The book, written by Aaron Leighton, self-described as “an award-winning illustrator and art director, as well as a fan of all things occult,” first hit bookstore shelves back in July.

The occult is seemingly everywhere these days, and very few people have gotten upset that a book like this that is specifically targeting children is being sold by major retailers all over the nation.

Our children are sponges, and they rapidly absorb whatever they see and hear.

If we fill their minds with good things, there is a much stronger chance that they will develop into solid young people.

But if we fill their minds with garbage, we shouldn’t be surprised when there are very negative consequences.

One thought on “POOP AND FARTS! YOU WON’T BELIEVE WHAT AMERICANS ARE BUYING FOR THEIR CHILDREN THIS HOLIDAY SEASON…”