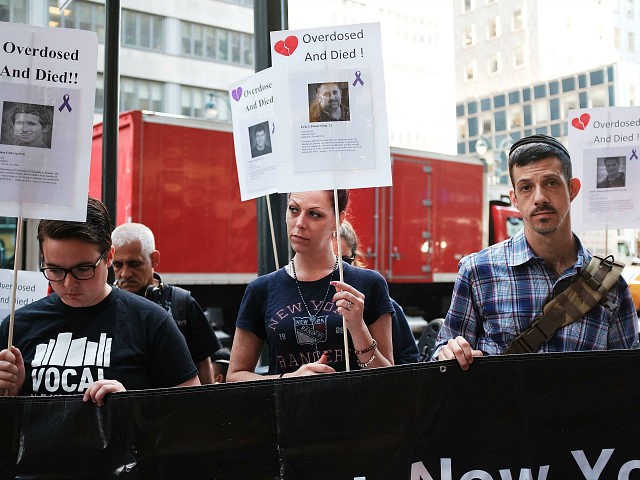 The opioid crisis is killing young, white suburban Americans more than any other demographic in the United States for the second consecutive year.

A newly released report by the Center for Disease Control and Prevention (CDC) reveals that among all racial groups in large cities, suburbs, and small towns, young white Americans between 25 to 34 years old living in suburbs had the highest opioid-involved overdose deaths in 2017 at a rate of nearly 60 deaths per 100,000.

This is the second consecutive year that young white Americans in the suburbs have died at the highest rate for opioid-involved overdose deaths. In 2016, this demographic had an opioid overdose death rate of nearly 51 deaths per 100,000 — more than any other group of Americans.

As Breitbart News has chronicled, young white American men are dying the most from fentanyl, the deadly opioid by which one pound can kill more than 220,000 people. Between 2011 and 2016, fentanyl overdose deaths increased by more than 1,000 percent. In 2011, for example, there were about 1,660 Americans who died of fentanyl overdoses. Fast forward to 2016, and there were 18,335 Americans who died from fentanyl.

Last year, the Immigration and Customs Enforcement (ICE) agency seized enough fentanyl to kill nearly twice the U.S. population, Breitbart News reported. For the first time, Americans are now more likely to die from an accidental opioid overdose than from injuries in a car crash.

Drug overdoses in 2017 killed an unprecedented 72,287 U.S. residents, nearly three times the number of individuals killed by global terrorism and 10,000 more than the number of Americans killed in the Vietnam War. Nearly 50,000 of those deadly overdoses were caused by either heroin or fentanyl.