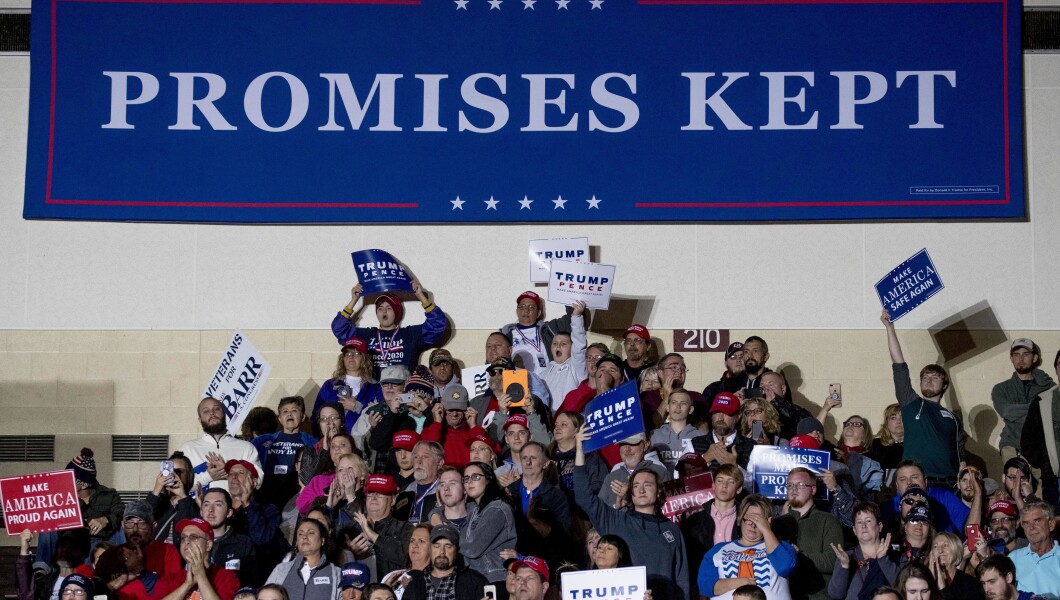 While the media and his critics focused on the bitterly divided House impeachment hearings, President Trump this week collected the most agenda wins yet, policy victories, including some backed by Democrats, that bolster arguments he’s making for reelection, according to advisers and analysts.

From adding judges to foreign policy, trade, immigration, defense spending, and China, Trump added several more achievements he will tout when he hosts his next campaign rally, standing in front of a 2020 “Promises Kept” sign.

“It was one of his best weeks yet,” said a key White House adviser.

One of his pollsters, John McLaughlin, joked that if public anger at impeachment continues to grow, worried Democrats might get in line to pass more of his agenda to give them protection in their reelections next year.

“Democrats in states and districts the president won are at serious risk if they vote for impeachment. So they are rushing to vote for the president’s popular positions,” he said, adding, “If [House Speaker Nancy] Pelosi and [Senate Minority Leader Chuck] Schumer keep pressing impeachment, it’s likely the president will get his entire agenda passed and reelected in a landslide.”

Plus, advisers noted, Wall Street hit another record, and Pelosi conceded that on impeachment, “It’s been going on 22 months — two and a half years, actually.”

And, the advisers added, with impeachment likely, the president was assured by McConnell that the Senate would move fast on a trial that will end in acquittal and might include the support of two Senate Democrats, according to Sen. Rand Paul.

“There is one world where the mainstream media is covering impeachment, but there is another world where Trump is racking up a myriad of accomplishments, many of which have the support of the same Democrats who want to remove him from office,” said political communications strategist Ron Bonjean.

A GOP adviser said, “President Trump and the Republicans are an irresistible force surging over, around, and through the gelatinous Democrats — a growing number of whom are realizing daily that what they’re doing is seen by the public as trivial and senseless. Just think of what could be accomplished for our country if the loony Left wasn’t so obsessed with destroying Trump.”

Trump biographer Doug Wead also took note of the president’s actions in the shadow of impeachment.

“Perhaps, for now, what he accomplished this week will be overshadowed by the impeachment, but by next summer, the impeachment may be seen as mean-spirited and partisan, and the string of victories will add to his incredible list of victories going into reelection season,” he said.

Wead, who spent months inside the White House interviewing the president and top aides, said that he hadn’t been surprised by Trump’s aggressive fight on impeachment and his campaign to rack up wins.

“During impeachment, any other president would retreat into the bunker and be consumed with defense. Endlessly gaming various scenarios. Instead, Trump, the businessman, is looking for a way to use it to his advantage,” he said.

“He is the master magician, waving one hand to distract, while with the other hand, he makes the trick work. In this case, the Democrats provided this unwanted distraction, but he clearly seized on the moment,” Wead added.