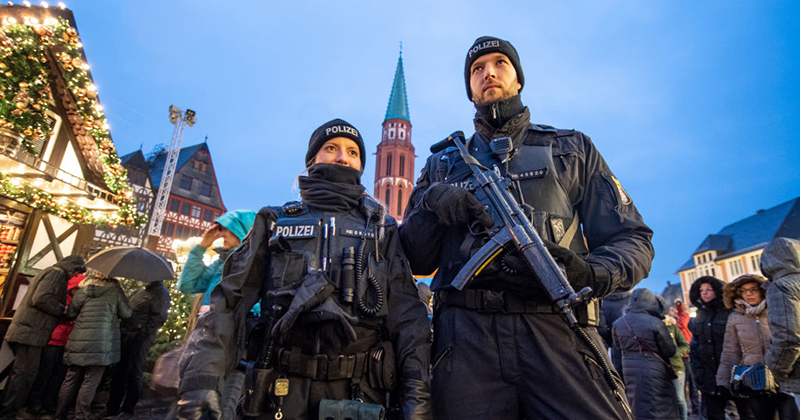 As the UK warns of a “very likely” terrorist attack at German markets, seasonal celebrations across Europe face further threat from bland identikit stalls, rip-off prices & a struggle to address the Christian roots of Christmas.

Ah, Christmas in Europe! Rosy-cheeked children waiting for Santa Claus and his team of reindeer to overwhelm them with gifts. A feast of mince pies, turkey and mulled wine.

Today the only place to really experience this idyll is in your dreams. Because Christmas celebrations in Europe have become a violent, bleak, homogenized, commercial disappointment.

There are plenty of reasons for this, involving all the big issues of our times: terrorism, economics, cultural shifts, diversity and even climate change.

Because the Christian festival offers a clear target to Islamist terrorists, many people are simply staying away, in fear.

The UK government’s latest advice warns that terrorists are “very likely” to carry out attacks in Germany over the festive period in what is a massive blow to the markets of Berlin, Cologne and elsewhere.

As the visitor numbers are starting to taper off, the pull of their spending power has dissipated for stallholders. Travel costs, cheaper items en masse from China and elsewhere, competition with local stores, Black Friday sales and a general decline in understanding what the Advent season is even about, have all contributed to the Christmas run-up being knocked off its perch as the Most Wonderful Time of the Year.

Of course, you cannot have any discussion today without gender rearing its head and so the online debate thrashes back and forth over whether “Father Christmas” is an appropriate moniker for a fat, bearded gentleman dressed in fur-trimmed red coat and black boots when maybe it should be insisted we use “Santa Claus” because it is considered more gender-neutral. Er, no.

Oh, the irony! Imagine just for a minute that we accused Muslims and Ramadan of making Christians feel uncomfortable. The howls of anguish from the liberals would be deafening. Instead, they order us to tip-toe around the festive season, to temper the intensity of our celebrations and spare a thought for those who don’t eat turkey by ensuring vegan options on the dinner table.

Another slice of tofurkey, grandma?

Not everything has to be a Euro-wide homogenous mish-mash of cultures and beliefs, despite what 40 years of the European Union has insisted. The differences between us all are what make us interesting. They are what make us human.

But the problems facing Christmas in Europe go further.

At the biggest seasonal event in London, the extortionately expensive Winter Wonderland in Hyde Park, thugs brawled in a queue for the beer hall at the weekend as children screamed and cried and two bouncers were filmed kicking a defenceless teenager in the head as he lay on the ground. They were promptly sacked.

As well as the spectacle of brawling at this rampantly commercial annual event, there is the Winter Wonderland comedy club. It’s completely unnecessary, however, because if you want a laugh just look at the cost of hiring a private hütte at the Bar Hütte Karaoke where you can fork out £200 for less than two hours of sitting in a shed with your friends in a depressingly lame attempt at creating an apres-ski vibe. Everyone knows there is never any snow in London at Christmas and when the time is up in the little wooden shack, customers simply trudge out into the mud, feeling slightly drunk, a little dispirited and shy of more than a few pounds they’ve blown on Jagerbombs.

In the new Trafalgar Square market, the buskers who regularly perform there have complained that the new Christmas market will force them to perform elsewhere while arts chiefs have decried the festive stalls as a “hurdy-gurdy of kitsch.”

The arts chiefs have a point, but the buskers don’t. Most Londoners will be delighted to have a break from their public displays of mediocre talent twinned with begging.

Meanwhile, over in Brussels this week, I mixed with squads of machine-gun toting soldiers as I strolled through the clearly secular Winter Wonder event where the melting pot of Belgium attempts to be all things to all people. Pizza from Sicily, soap from Provence, paté from Ardennes, faux-Scandi salmon, reindeer hides at 200 euros a pop, musical instruments from Latin America, waffles, waffles and more waffles.

A huge, transportable ferris wheel dubbed the Brussels Eye turned slowly above Place Sainte-Catherine, not that there is much to see in the cold, dark, rain-soaked evening when the market opens. What has any of this to do with Christmas?

Then there’s Italy, where, on a weekend visit to the picturesque alpine towns of Piemonte in northern Italy, I found Christmas market stalls selling knitted hoodies, cardigans and sweaters with winter motifs, proudly declaring they are made out of 100 per cent yak wool in Nepal. The irony of selling these clothes in the very region of Italy once world-renowned for the number of jobs and quality of its cashmere from the many now-dormant woollen mills was, seemingly, missed.

The traditional lifesize replica of the nativity (at least it was an attempt) was missing one thing: the infant Jesus with the Virgin Mary looking lovingly at an empty crib.

No explanation was given for the missing child. Just cold? Abduction?

If there is one thing that these continental markets do share, is the nasty, identikit wooden chalets which form the centrepiece of these winter events. Each one adorned with a sad little string of lights and some white felt for the roof to represent snow. The most disturbing chalet I saw had the added decoration of a real boar’s head which had lost half of it’s snout, to either a predator or the cold. It was disgusting.

The owner was trying to sell sausages but maybe needed a rethink on his front-of-house offering first.

And then, from Germany, the nation that is responsible for bringing these Bavarian chalets to a wider audience, a survey revealed that 57 percent of  Germans are looking to scale down or even do without Christmas lights because of fears about climate change.

So there you have it: the very real threat of terrorist attack; drunken, brawling thugs spoiling any sense of childlike excitement; liberals decrying the death of diversity and sparking a trans rowt; identikit, overpriced markets selling irrelevant tat; fear of upsetting ethnic minorities; naked commercial opportunism, references to a Christian festival ignored and a sense of bewilderment about how any of this has a place in the traditional feast of Noël.

Sadly, this is now the Merry European Christmas.