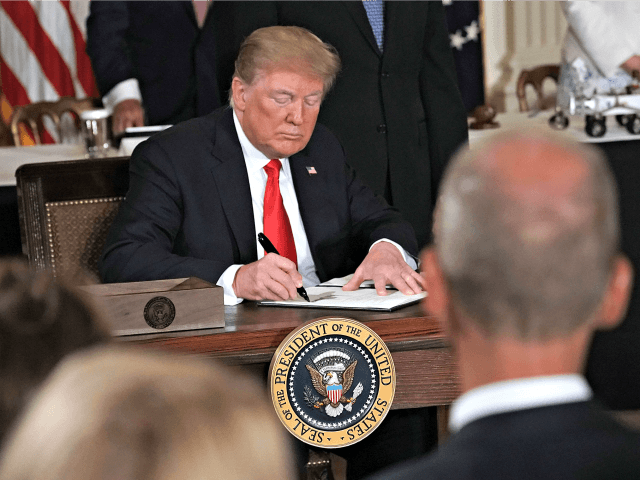 JOINT BASE ANDREWS, MARYLAND — Flanked by two F-35 fighter jets and in front of a giant American flag, President Trump on Friday signed the 2020 National Defense Authorization Act that officially created the Space Force, the sixth and first new military branch since 1947.

“For the first time since Truman, we will create a brand new American military service,” Trump said. “You will witness the birth of the Space Force. That’s a big moment and we’re all here for it.”

The creation of the Space Force marked the achievement of one of the president’s top national priorities.

The new branch will reside inside the Air Force.

The president thanked Vice President Mike Pence for his work in helping to establish the Space Force. He also announced the appointment of Air Force Gen. John “Jay” Raymond as the new Space Force commander. “He will now join the Joint Chiefs,” Trump said.

To mark the historic moment, the president signed the bill inside a giant aircraft hangar at the Andrews Air Force Base in Maryland surrounded by an audience of several hundred young service members, Pentagon officials, and other distinguished guests.

Applause for Trump — and some whooping, too: pic.twitter.com/S2lN4MubNw

Members of the House at the soon-to -be creation of the #SpaceForce — I see @RepMattGaetz @RepMichaelWaltz @RepJoeWilson: pic.twitter.com/EW7fPqKSuh

The military’s top civilian and uniformed leaders were all in attendance, as well as United States Trade Representative Ambassador Robert Lighthizer and White House adviser and First Daughter Ivanka Trump.

One airman told Breitbart News it was a “historic moment” to witness the creation of the Space Force.

The NDAA, a yearly bill that authorizes the Pentagon’s budget, also established a 3.1 percent pay raise for members of the military, the largest pay raise in a decade.

The bill also pays for scores of new aircraft, tanks, and ships. It also eliminates the “widow’s tax” for fallen service members and authorizes paid parental leave for federal civilian workers. The bill also allows for members of the military to sue for medical malpractice in cases after 2017.

The Senate passed the bill on Thursday, sending it to the president. It authorizes $783 billion for defense spending for fiscal year 2020. The bill was passed on a bipartisan basis, 11-81.

With the bill, Trump declared the rejection of “American decline.” Trump has raised spending for the military to new levels, after a decade of deep cuts under sequestration. He signed a defense bill authorizing $716 billion for the military in 2018, and $700 billion in 2019.