A new satellite image of a factory where North Korea makes military equipment used to launch long-range missiles shows the construction of a new structure.

The release of several images from Planet Labs comes amid concern that North Korea could launch a rocket or missile as it seeks concessions in stalled nuclear negotiations with the United States. North Korea recently has warned of a possible “Christmas gift,” saying the Trump administration was running out of time on nuclear negotiations, and it was up to the U.S. to choose what “gift” it gets from Pyongyang.

One of the satellite images taken on Dec. 19 shows the completion of a new structure at the March 16 Factory near Pyongyang, where North Korea is believed to be developing and manufacturing vehicles used as mobile launchers for long-range ballistic missiles. 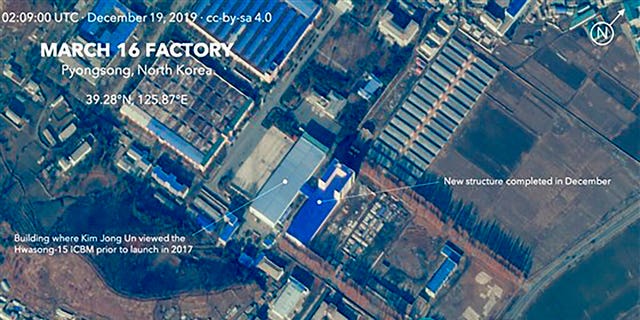 This Dec. 19, 2019, satellite image from Planet Lab Inc., that has been analyzed by experts at the Middlebury Institute of International Studies, shows the March 16 Factory in Pyongsong, near Pyongyang, where North Korea manufactures military trucks used as mobile launchers for long-range missiles. This new satellite image on a North Korean missile-related site shows the construction of a new structure this month. (Planet Labs Inc, Middlebury Institute of International Studies via AP)

Jeffrey Lewis, director of the East Asia nonproliferation program at the Middlebury Institute, said in an email that the construction seemed to be an expansion of the factory, which would be “big news.”

North Korea used what appeared to be vehicles imported from China during its three flight tests of the Hwasong-14 and -15 intercontinental ballistic missiles in 2017, Lewis said. An increased capacity to produce mobile launchers would potentially help expand North Korea’s ICBM force and improve its survivability during nuclear conflict. 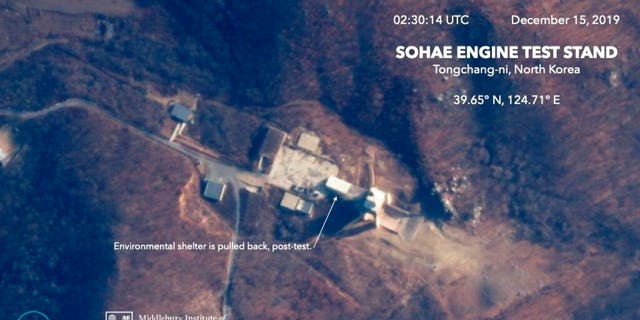 This Dec. 15, 2019, satellite image from Planet Lab Inc., that has been analyzed by experts at the Middlebury Institute of International Studies, shows the Sohae Engine Test Stand in Tongchang-ri, North Korea. This new satellite image on a North Korean missile-related site shows the construction of a new structure this month. (Planet Labs Inc, Middlebury Institute of International Studies via AP)

“As far as I know, North Korea only imported eight of those vehicles,” Lewis said about the vehicles the North used during the 2017 tests.

“I would think North Korea would want 50-100 such systems. … This would probably be some mix of ICBMs we have seen and the new system that North Korea claims is under development.”

Nuclear talks between the U.S. and North Korea have been stalled since a February summit between leaders President Trump and Kim Jong Un fell apart.

Earlier this month, North Korea carried out two major tests at its long-range rocket launch and missile engine testing site in the country’s northwest. Experts believe it tested a new engine for either an ICBM or a satellite launch vehicle.