“We have a very extraordinarily expensive air base that’s there.” 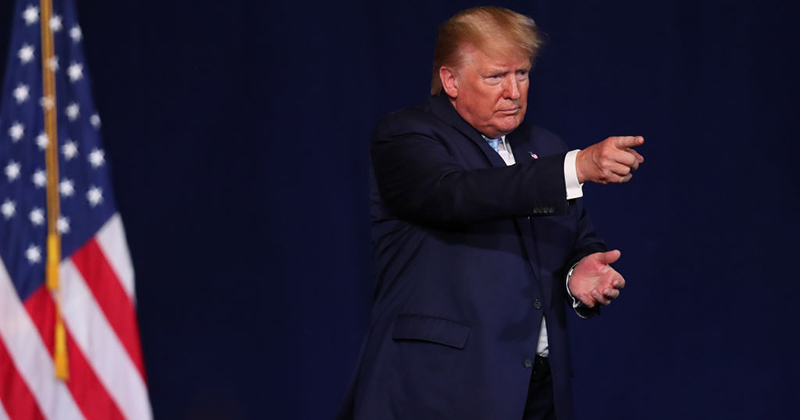 Just hours after Iraq voted to expel US troops stationed in Iraq, Trump made it clear that he has no interest in vacating the nation that has been a stalwart US military outpost in the middle east for nearly two decades

Speaking to reporters on Air Force One said “we’re not leaving” unless Iraq “pays us back” for a US air base built in Iraq.

“We have a very extraordinarily expensive air base that’s there. It cost billions of dollars to build. Long before my time. We’re not leaving unless they pay us back for it.” Trump told the AF1 reporter pool.

That, however, wasn’t enough, and Trump also made it clear that that in addition to billions in reimbursements, unless the US left on a “very friendly basis”, the US would hit Iraq with “very big” sanctions like “they’ve never seen before ever.”

“If they do ask us to leave, if we don’t do it in a very friendly basis. We will charge them sanctions like they’ve never seen before ever. It’ll make Iranian sanctions look somewhat tame.”

Barack Obama has his fingerprints all over the sabotage of the Trump Administration and ultimately the future of the United States. From the allegations of the wiretapping of Trump’s phones during the 2016 campaign to the ongoing details of the Barr-Durham investigation, Barack Obama and his Secretary of State Hillary Clinton just keep the hits coming. Lo and behold, the point man behind the siege on the American Embassy in Iraq,

And just to make it abundantly clear, Trump also added that “if there’s any hostility, that they do anything we think is inappropriate, we are going to put sanctions on Iraq, very big sanctions on Iraq.”

“We’re not leaving” Iraq, Trump says, unless Iraq repays the US for an air base.

“It cost billions of dollars to build. Long before my time. We’re not leaving unless they pay us back for it,” Trump said on AF1.

Amusingly, if Trump is indeed serious that Iraq will have to reimburse the US for its countless military bases, camps and other installations, the US will be able to repay its $23 trillion in debt (and have money leftover), when all is said and done: here is a partial list of the US camps in iraq:

… This is just through the letter C – clearly there are many, many more. Click here for the full list.

In any event, earlier, Axios reported that The Trump administration tried to stop an Iraqi vote to expel the U.S. military from the country and citing unnamed sources, said that the Trump administration tried to persuade top Iraqi officials to kill the parliamentary effort. As a reminder, earlier on Sunday, Iraq’s parliament voted to approve of the expulsion of the U.S. military following last week’s attack that killed Soleimani.

A US official told Axios that expelling the U.S. military from Iraq “would be inconvenient for us, but it would be catastrophic for Iraq”, adding that “it’s our concern that Iraq would take a short-term decision that would have catastrophic long-term implications for the country and its security.”

“But it’s also what would happen to them financially if they allowed Iran to take advantage of their economy to such an extent that they would fall under the sanctions that are on Iran,” the official added. “We don’t want to see that. We’re trying very hard to work to have that not happen.”

A senior Iraqi official told Axios that many Kurdish and Sunni members of parliament, who tend to be more supportive of the U.S. presence in Iraq, did not attend the vote to expel the U.S. presence.

“This is a temporary victory for the parties which are pro-Iranian,” the official told Axios. “But it’s also a clear message from the Sunnis and from the Kurds [who didn’t vote] and from some Iraqi Shia for the Americans to tell them we want you to stay in Iraq.