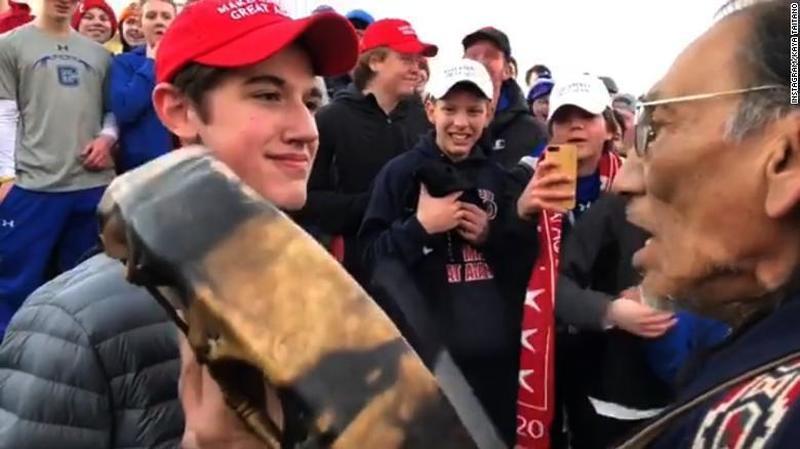 Sandmann was viciously attacked by left-leaning news outlets over a deceptively edited video clip from the January, 2019 March for Life rally at the Lincoln Memorial, in which the teenager, seen wearing a MAGA hat, appeared to be mocking a Native American man beating a drum (a known political grifter who lied about the incident, and stole valor).

Around a day later, a longer version of the video revealed that Sandmann did absolutely nothing wrong – but not until the media had played judge, jury and executioner of Sandmann’s reputation.

That included CNN‘s Reza Aslan, who asked over Twitter “Have you ever seen a more punchable face than this kid’s?”

Honest question. Have you ever seen a more punchable face than this kid’s? https://t.co/jolQ7BZQPD—
Reza Aslan (@rezaaslan) January 20, 2019

“Contrary to its ‘Facts First’ public relations ploy, CNN ignored the facts and put its anti-Trump agenda first in waging a 7-day media campaign of false, vicious attacks against Nicholas, a young boy who was guilty of little more than wearing a souvenir Make America Great Again cap,” Sandmann claimed in a 58-page lawsuit filed last May, according to the Washington Times.

Sandmann’s attorney told Fox News last March that “CNN was probably more vicious in its direct attacks on Nicholas than The Washington Post. And CNN goes into millions of individuals’ homes. It’s broadcast into their homes.”

In total, Sandmann has sought $800 million after also suing the Washington Post and NBC Universal.

Sandmann claims that the Post – which helped publicize a now infamous photo that helped trigger an Internet mob that swiftly outed the teen and demanded he be punished – led the hate campaign against Sandmann – and failed to practice proper journalistic due diligence – “because he was the white, Catholic student wearing a red ‘Make America Great Again’ souvenir cap on a school field trip to the January 18 March for Life in Washington, D.C. when he was unexpectedly and suddenly confronted by Nathan Phillips (‘Phillips’), a known Native American activist, who beat a drum and sang loudly within inches of his face (‘the January 18 incident’).”

Trial dates have not yet been set in those cases.

“This case will be tried not one minute earlier or later than when it is ready,” said Sandmann’s attorney, Lin Wood, who says they also plan to sue the owners of The Enquirer, Gannett, within the next 60 days.

Meanwhile, filmmaker and pundit Mike Cernovich compiled a short list of some of CNN‘s more memorable reporting screwups (via Cernovich.com):