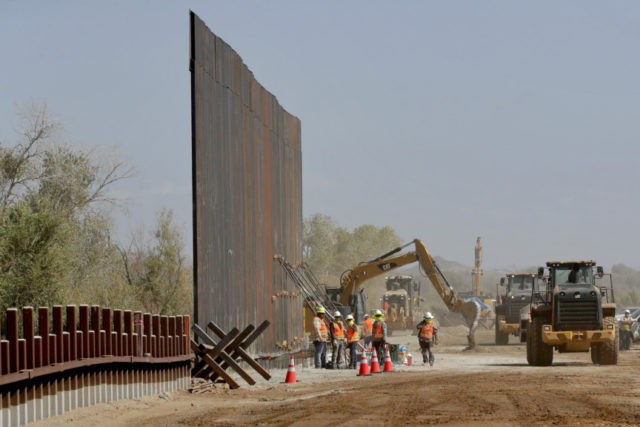 The government will not have 450 miles of border wall built by the end of 2020, homeland security chief Chad Wolf said at a press event, where he touted the completed construction of 100 miles of wall.

“I can tell you right now that we remain confident that we are on track to [reach] 400, 450 miles that are either completed or under construction by the end of 2020,” Wolf told attendees at a press conference in Yuma, Arizona.

The “or under construction” language admits there is little likelihood that the Department of Homeland Security will be able to meet President Donald Trump’s goal of building 500 miles of wall by November, despite the release this week of $3.6 billion in Pentagon money for the wall project.

CBP and Pentagon officials insist they remain on track to complete about 450 miles of fencing by the election. Of that, about 110 miles will be added to areas where there is currently no barrier. The height of the structure will vary between 18 and 30 feet, high enough to inflict severe injury or death from a fall.

As Wolf admitted the wall would not be completed, he said the construction of the first 100 miles is a big win:

We have reduced time [delays] from appropriations [in Congress] to shovel-in-the-ground from two years to nine months, and we also continue to work with our great partners with the Corps of Engineers to make sure that we have the land acquisition needed to build to build the wall. I will also say that we’re continuing to assess the 30-day … delay that we had in that a court injunction.

So that’s going to impact as well. But I can tell you right now that we remain confident that we are on track to 400, 450 miles that are either completed or under construction by the end of 2020.

The first 100 miles of construction has replaced easily-bypassed walls, including the low walls that were constructed from the airstrip landing mats designed to help pave military airfields.

The shortcomings in DHS’s wall-building projects, however, are partly offset by huge diplomatic deals that Trump and DHS officials have won with the countries south of the U.S. border.

The main deal with Mexico has allowed officials to send more than 55,000 Central American migrants back to Mexico, so preventing them from getting U.S. jobs as they wait for much-delayed asylum hearings. The denial of U.S. jobs is a huge deterrent to migrants, because migrants know they will not be able to repay their smuggling loans if they cannot get U.S. jobs.

Other deals will allow officials to fly arriving migrants to other countries throughout the region, and so prevent them from even filing for asylum in the United States. “Hondurans and Salvadorans get sent to Guatemala and Guatemalans get sent to Honduras,” said a tweet from Aaron Reichlin-Melnick, an advocate at the pro-migration American Immigration Council. “None of them get to apply for asylum here.”

Wolf told the press conference that 96 migrants were recently flown to Guatemala so they could seek asylum in that country. Only one migrant did seek asylum, while the others went back to their home countries, he said.

“75 Hondurans and 53 Salvadorans have been sent to Guatemala as part of the Asylum Cooperation Agreement with the United States,” said a January 10 tweet from a journalist in Central America. “Of those 128 people, only 9 have applied for refuge in Guatemala. Of those 9, 5 have abandoned the process.”,