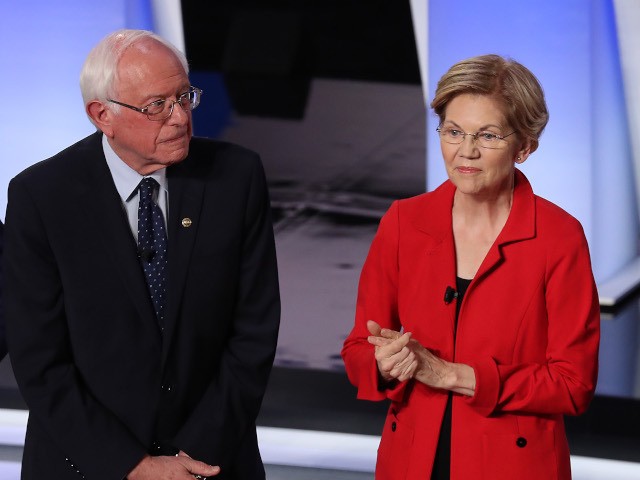 CNN, citing sources with knowledge of the situation, reported on Monday that Sanders made the remark during a meeting at Warren’s Washington, D.C., apartment in December 2018.

The two agreed that if they ultimately faced each other as presidential candidates, they should remain civil and avoid attacking one another, so as not to hurt the progressive movement. They also discussed how to best take on President Donald Trump, and Warren laid out two main reasons she believed she would be a strong candidate: She could make a robust argument about the economy and earn broad support from female voters.

Sanders responded that he did not believe a woman could win.

The description of that meeting is based on the accounts of four people: two people Warren spoke with directly soon after the encounter, and two people familiar with the meeting.

The report further states that Sanders expressed “frustration” over identity politics playing a larger role in the Democrat Party. Warren reportedly told Sanders that she disagreed with his assessment, arguing that a woman can indeed win the White House.

Sanders vehemently denied making the comment in a statement to CNN,

“It is ludicrous to believe that at the same meeting where Elizabeth Warren told me she was going to run for president, I would tell her that a woman couldn’t win,” said Sanders. “It’s sad that, three weeks before the Iowa caucus and a year after that private conversation, staff who weren’t in the room are lying about what happened. What I did say that night was that Donald Trump is a sexist, a racist, and a liar who would weaponize whatever he could. Do I believe a woman can win in 2020? Of course! After all, Hillary Clinton beat Donald Trump by 3 million votes in 2016.”

The development comes as the pair’s non-aggression agreement appears to have unraveled.

A recent Politico report revealed a Sanders campaign volunteer script includes criticism of Warren, alleging that she appeals to “affluent” and “highly-educated” voters and brings “no new bases” into the Democrat Party. In response, Warren (D-MA) expressed disappointment over Sanders’s decision to turn negative on her.

“I was disappointed to hear that Bernie is sending his volunteers out to trash me,” Warren said Sunday. “Bernie knows me and has known me for a long time. He knows who I am, where I come from, what I have worked on and fought for.”

“Democrats need to unite our party, and that means pulling in all parts of the Democratic coalition,” she added. “I hope Bernie reconsiders and turns his campaign in a different direction.”

Earlier Monday, President Donald Trump took to Twitter to highlight the lawmakers’ fraying pact, writing: “Bernie Sander’s volunteers are trashing Elizabeth “Pocahontus” Warren. Everybody knows her campaign is dead and want her potential voters. Mini Mike B is also trying, but getting tiny crowds which are all leaving fast. Elizabeth is very angry at Bernie. Do I see a feud brewing?”

Bernie Sander’s volunteers are trashing Elizabeth “Pocahontus” Warren. Everybody knows her campaign is dead and want her potential voters. Mini Mike B is also trying, but getting tiny crowds which are all leaving fast. Elizabeth is very angry at Bernie. Do I see a feud brewing?

A recent CNN/Des Moines Register/Mediacom poll found Warren is in a four-way race in Iowa, with Sanders, former Vice President Joe Biden, and ex-South Bend, Indiana, Mayor Pete Buttigieg. The Hawkeye State’s caucus, the first in the nation, is a mere 21 days away.