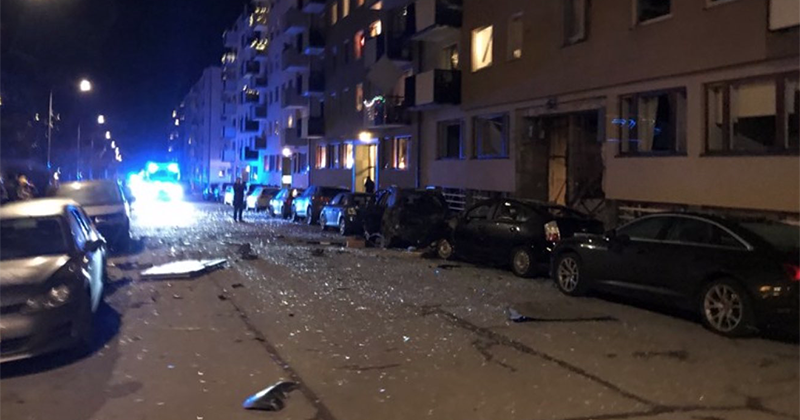 A posh district in central Stockholm was rocked by an explosion in the early hours of Monday morning. The blast was so intense it shattered windows and bathed the entire street in broken glass.

An explosive charge was reportedly placed on the gate outside a property in the area at roughly 1am local time in the Östermalm area. The blast, which completely destroyed one vehicle, damaged several others and blew the windows out of apartments along the entire street, could be heard several kilometers away.

No one was injured in the incident, but 30 residents were evacuated immediately as a precaution and spent the night at emergency accommodation in a local school.

“We believe that the explosion happened in or at the building, but exactly where is still unclear. There are damaged cars nearby, but the explosion probably didn’t happen in them,” Stockholm police spokesperson Mats Eriksson said Monday.

A staircase was reportedly severely damaged, which may have prompted the ongoing evacuation. In addition, a door was blown to the opposite side of the street by the sheer force of the explosion, which also took out a large section of an apartment balcony.

The Swedish bomb squad was also deployed to the scene to begin their investigations into the circumstances of the explosion. However, just two hours after the Stockholm blast, there was another suspicious explosion reported in the university town of Uppsala, roughly an hour away.

Again, one building and several vehicles were damaged in the explosion but there were no reports of any injuries. Police have not indicated whether the explosions were connected.

Sweden’s authorities are struggling to curb a spate of bombings which has swept the country in recent months despite the establishment of a specialized task force.