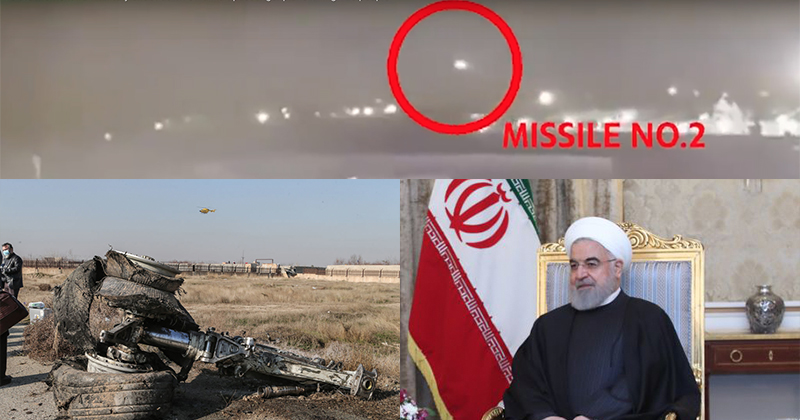 The Iranian military is now blaming the US (again) for the downing of Ukrainian International Airlines Flight 752, after it admitted that IRGC commanders shot the plane out of the sky last week, and in the wake of a new video emerging showing a SECOND missile was fired at the civilian airliner.

Abdollahi also seemed to suggest that the US military hackers could have actually shot down the plane as part of a cyber attack to make Iran look bad, according to the report.

After initially claiming “mechanical error” caused the plane to crash, then admitting they shot it down ‘by mistake’ after evidence of a missile strike could no longer be denied, Iran has now pivoted back to directly blaming the US.

There is no evidence that the US took any military or other action in Iran on the evening the airliner was struck.

Iran’s flip-flopping comes after intense protests over the airliner downing and attempted cover-up, and the emergence of a new video showing a second ‘kill shot’ missile was fired, throwing the ‘mistake’ explanation into serious doubt.

Iranian President Hassan Rouhani also accused the US Wednesday of being responsible for the plane strike, saying that “The root of all sorrows goes back to America … this cannot be a reason for us not to look into all the root causes.”

He added that “One cannot believe that a passenger plane is struck near an international airport while flying in a [commercial] flight channel,” after previously saying that IRGC commanders were not the only ones involved in the plane downing, noting that “There were others, too.”

The Iranian parliament also stated that “we are in powerful confrontation with the criminal US and do not allow a mistake… to pave the ground for misusing the issue by the enemies.”

The Iranian judiciary also announced Tuesday that they have arrested numerous individuals in connection with the missile strike, claiming that one of the people in detention is believed to have filmed the missile strike and the plane crashing to the earth.

Tasnim News Agency, which is close to the Revolutionary Guard, reported that the person is being held in an effort “to probe the factors involved in the incident”.

However, Nariman Gharib, a UK journalist who first published the footage on his Twitter account says the person who shot the footage is actually “in a safe place”:

Rumours about the arrest of the source of this #PS752 footage by Iran IRGC are FALSE. https://t.co/n9M9qIbU6D

I'm getting lots of calls.

They have arrested the WRONG person regarding the #Flight752 In Iran. The person who is a source of the video is SAFE and I can assure you IRGC is orchestrating another lie. They killed 176 passengers on commercial plane. Thats the real story here. https://t.co/X2k0ycwMBD