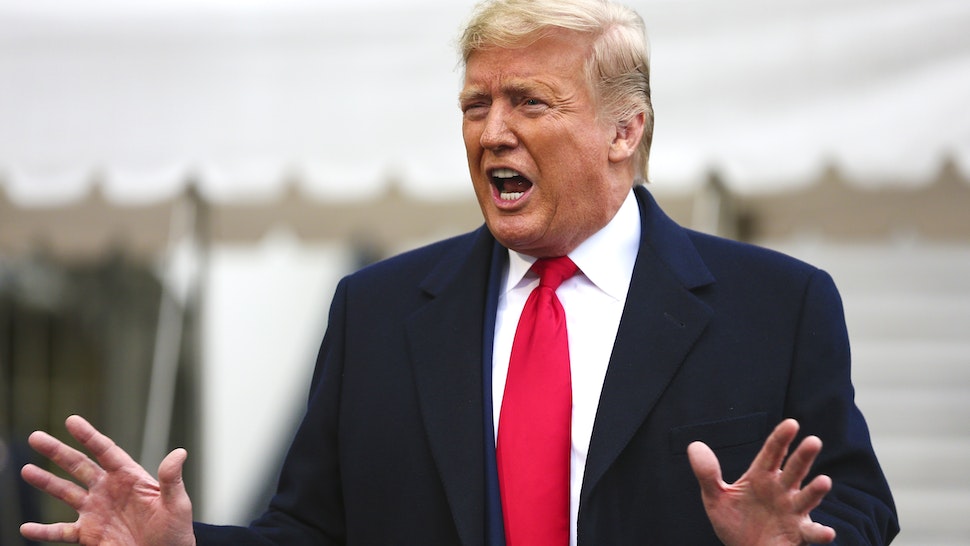 President Donald Trump’s legal defense team began their offensive against Democrats’ partisan impeachment on Saturday, accusng the Democrats of a “brazen and unlawful attempt to overturn the results of the 2016 election and interfere with the 2020 election.”

The remarks came in a letter to the U.S. Senate from Trump lawyer Jay Sekulow and White House lawyer Pat Cipollone, both of whom are on Trump’s legal defense team.

“The Articles of Impeachment submitted by House Democrats are a dangerous attack on the right of the American people to freely choose their President,” The letter begins. “This is a brazen and unlawful attempt to overturn the results of the 2016 election and interfere with the 2020 election-now just months away.”

“The Articles of Impeachment are constitutionally invalid on their face,” the letter continued. “They fail to allege any crime or violation of law whatsoever, let alone ‘high Crimes and Misdemeanors,’ as required by the Constitution. They are the result of a lawless process that violated basic due process and fundamental fairness. Nothing in these Articles could permit even beginning to consider removing a duly elected President or warrant nullifying an election and subverting the will of the American people.”

Trump’s legal defense team said the first Article of Impeachment for “abuse of power” must be rejected because it “fails on its face to state an impeachable offense. It alleges no crimes at all, let alone ‘high Crimes and Misdemeanors,’ as required by the Constitution. In fact, it alleges no violation of law whatsoever. House Democrats’ ‘abuse of power’ claim would do lasting damage to the separation of powers under the Constitution.”

Trump’s defense team laid out four facts that they say prove that Trump did nothing wrong during the phone call:

“Not only does the evidence collected by House Democrats refute each and every one of the factual predicates underlying the first Article, the transcripts of the April 21 call and the July 25 call disprove what the Article alleges,” the letter continued. “When the House Democrats realized this, Mr. Schiff created a fraudulent version of the July 25 call and read it to the American people at a congressional hearing, without disclosing that he was simply making it all up. The fact that Mr. Schiff felt the need to fabricate a false version of the July 25 call proves that he and his colleagues knew there was absolutely nothing wrong with that call.”

The letter also hit House Democrats for their widely criticized flawed impeachment process which “denied the President every basic right, including the right to have counsel present, the right to cross-examine witnesses, and the right to present evidence.”

Trump’s legal defense team said the second Article of Impeachment for obstruction of Congress must be rejected because it “also fails on its face to state an impeachable offense. It does not allege any crime or violation of law whatsoever.”

“To the contrary, the President’s assertion of legitimate Executive Branch confidentiality interests grounded in the separation of powers cannot constitute obstruction of Congress,” the letter continued. “Furthermore, the notion that President Trump obstructed Congress is absurd. President Trump acted with extraordinary and unprecedented transparency by declassifying and releasing the transcript of the July 25 call that is at the heart of this matter. Following the President’s disclosure of the July 25 call transcript, House Democrats issued a series of unconstitutional subpoenas for documents and testimony. They issued their subpoenas without a congressional vote and, therefore, without constitutional authority.”

“They sought testimony from a number of the President’s closest advisors despite the fact that, under longstanding, bipartisan practice of prior administrations of both political parties and similarly longstanding guidance from the Department of Justice, those advisors are absolutely immune from compelled testimony before Congress related to their official duties,” the letter continued. “And they sought testimony disclosing the Executive Branch’s confidential communications and internal decision-making processes on matters of foreign relations and national security, despite the well-established constitutional privileges and immunities protecting such information.”

Trump’s legal defense team said that the administration “replied appropriately to these subpoenas and identified their constitutional defects.”

“Tellingly, House Democrats did not seek to enforce these constitutionally defective subpoenas in court,” the letter concluded in its attack on the second Article of Impeachment. “To the contrary, when one subpoena recipient sought a declaratory judgment as to the validity of the subpoena he had received, House Democrats quickly withdrew the subpoena to prevent the court from issuing a ruling. The House may not usurp Executive Branch authority and may not bypass our Constitution’s system of checks and balances. Asserting valid constitutional privileges and immunities cannot be an impeachable offense. The second Article is therefore invalid and must be rejected.”

The letter concluded by stating that Democrats’ partisan impeachment must be rejected because it would “do lasting damage to our structure of government” by seizing the president’s power “under Article II of the Constitution to determine foreign policy” and by attempting to “control and penalize the assertion of the Executive Branch’s constitutional privileges, while simultaneously seeking to destroy the Framers’ system of checks and balances.”

This report has been updated to include additional information