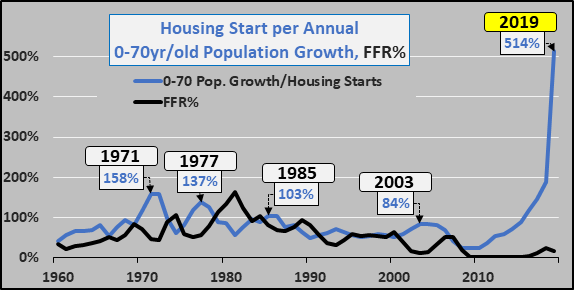 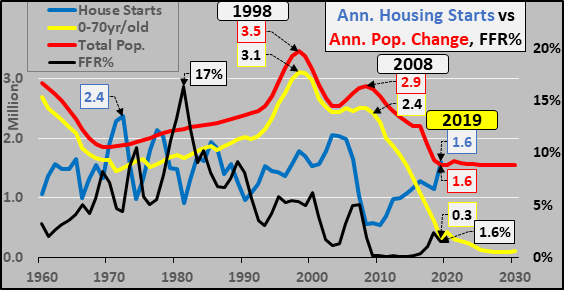 Really take a minute to check to understand these relationships…its really important.

From 1960 to 2008, annual population growth (red line) varied from about 1.8 to 3.5 million a year and the vast majority of that growth came among the under 70 year old population (yellow line).  During this nearly five decades, housing starts (blue line) varied from about 1 to 2 million units annually, with sharp inverse swings based on the cost of money represented by the changes in the federal funds rate (black line).

But starting in 2008, housing starts fell below 1 million units and would remain there through 2012 despite the cost of money (federal funds rate) sitting at zero for nearly a decade.  The NAR and others suggest there is a housing shortage due to this period of significantly below trend housing starts…but if you happen to look at the red line (decelerating total population growth) and the yellow line (collapsing population growth among the under 70 year old population), perhaps something else is happening.

70+ year-old elderly folks have the highest home ownership rates, are least likely to undertake new loans, and have the lowest labor force participation rates among the adult population at something like 1 in 10 working versus 8 in 10 among 50 year-olds.  In 2019, the 70+ population grew by about 1.3 million.  Point is, 70+ year-olds are not net home buyers but net sellers as they pay down/pay off their mortgages, downsize, move to managed care, or pass away.

It is the annual growth of the under 70 year-old population that drives demand for new housing, that has high levels of employment, and the willingness to undertake long term mortgage debt.  In 2019, the under 70 year-old population grew by less than 300 thousand.  The 90%+ annual deceleration in the potential buyers versus a ten-fold rise in the annual growth of elderly has turned the housing market upside down.

But last year, more new homes were started than the total population increased…something that had not happened since the early 1970’s.  The chart below shows annual starts as a percentage of annual population growth moving inverse the federal funds rate.  The sharp increase in housing starts amid a population growth slowdown is definitely noteworthy. 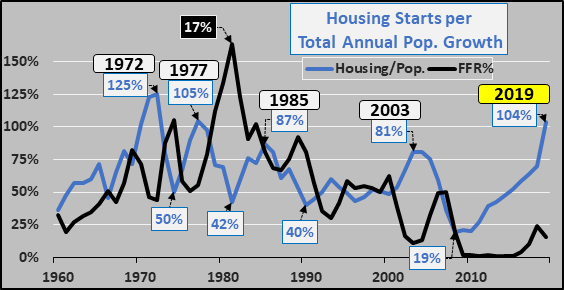