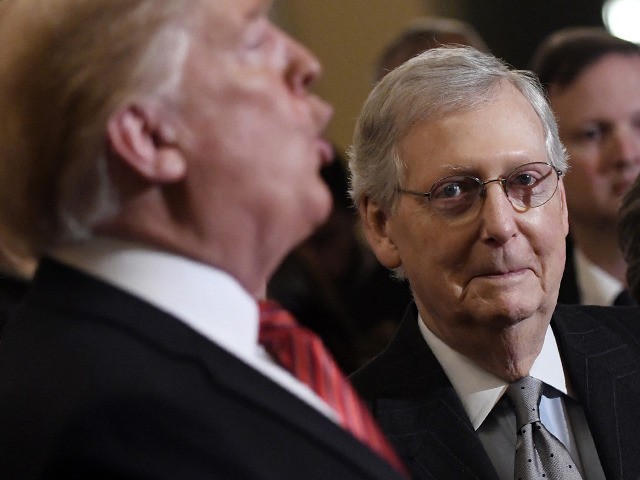 The Senate is expected to hold an acquittal vote in the impeachment trial of President Donald Trump next week, Republican senators told reporters on Friday evening.

Following a closed-door Senate Republican conference meeting, Sen. Roy Blunt (R-MO) and Sen. Mike Braun (R-ID) said the upper chamber will vote on an organizing resolution to establish the procedures for next week’s votes. Lawmakers are expected to deliver their closing arguments on Monday and hold open deliberations Tuesday. A vote on the articles of impeachment — abuse of power and obstruction of Congress — will occur Wednesday.

“There was some feverish discussion,” Braun told The Hill.

Earlier Friday, the Senate voted 51-49 against a motion to allow for subpoenas to be issued for additional witnesses and documents in the trial.

In a statement, Senate Majority Leader Mitch McConnell (R-KY) lauded the vote’s outcome and predicted that the trial will end “in the coming days.”

“A majority of the U.S. Senate has determined that the numerous witnesses and 28,000-plus pages of documents already in evidence are sufficient to judge the House Managers’ accusations and end this impeachment trial. There is no need for the Senate to re-open the investigation which the House Democratic majority chose to conclude and which the Managers themselves continue to describe as “overwhelming” and “beyond any doubt,” said McConnell.

“Never in Senate history has this body paused an impeachment trial to pursue additional witnesses with unresolved questions of executive privilege that would require protracted litigation. We have no interest in establishing such a new precedent, particularly for individuals whom the House expressly chose not to pursue,” added the Kentucky Republican added.

“Senators will now confer among ourselves, with the House Managers, and with the President’s counsel to determine next steps as we prepare to conclude the trial in the coming days,” he concluded.

Senators took a break immediately after the vote during which Senate Minority Leader Chuck Schumer (D-NY) described the outcome of the vote as a “grand tragedy.”

“America will remember this day, unfortunately, when the Senate did not live up to its responsibilities, when the Senate turned away from truth and went along with a sham trial,” he told reporters.

The outcome of the vote was a forgone conclusion after Sen. Lisa Murkowski (R-AK) announced she would vote against witnesses. She, Sen. Lamar Alexander (R-TN) Collins and Romney were seen as swing votes heading into Friday.

The Senate closed the questioning stage of the trial on Thursday and on Friday entered a phase to consider all motions.

This is the stage at which Democrats hoped to persuade at least four GOP senators to join them and vote to include key witnesses such as former national security adviser John Bolton and White House chief of staff Mick Mulvaney.

President Trump seemingly responded to the vote by tweeting that “No matter what you give to the Democrats,” they will “they will NEVER be satisfied.”

No matter what you give to the Democrats, in the end, they will NEVER be satisfied. In the House, they gave us NOTHING!